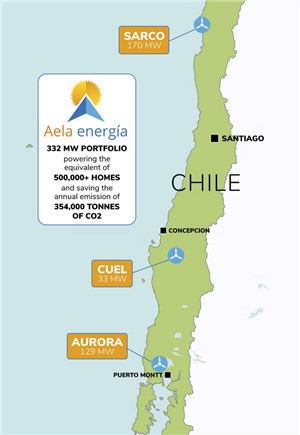 Established in 2013 as part of a joint venture between Actis (60%) and Mainstream (40%), Aela has grown to become Chile’s largest independent power producer (IPP) of renewable energy. This planned exit reflects the successful culmination of Actis and Mainstream’s partnership strategy for Aela.

The successful sale of Aela demonstrates the strength of the Actis-Mainstream partnership, and the comprehensiveness of its value creation strategy.

The projects were developed and constructed by Mainstream and, throughout the development process, the partners have delivered sustainable development, guided by close engagement with local communities.

With the support of Actis and Mainstream’s dedicated responsible investment professionals, Aela has implemented the highest international standards pertaining to health, safety, and environmental protection. Aela has also developed a deep commitment to local development and continues to operate a community investment fund that finances entrepreneurship, educational, and environmental protection initiatives.

Lucy Heintz, Partner and Head of Energy at Actis, commented: "Building a market-leading IPP is an astonishing achievement. Aela is a true sustainability leader within the Chilean energy sector, not only in the context of the climate emergency but for its progressive approach to inclusion and diversity. This business and its contribution to the communities it serves will have a long lasting positive impact."

"Building this market-leading renewable energy provider and selling it onwards to Innergex marks the immensely successful conclusion to our involvement with Aela. As one of Chile’s largest renewable energy companies, we remain focused on building out and expanding our multi-gigawatt wind and solar platforms in the region."

Credit Suisse and Clifford Chance advised on the transaction.