Iberdrola hires more than 5,600 people in the last year

Iberdrola hires more than 5,600 people in the last year 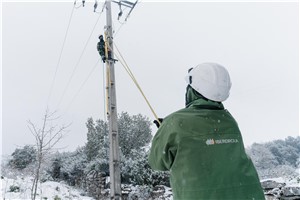 Despite the health and economic crisis, Iberdrola has hired more than 5,600 people in the last year, bringing its workforce to nearly 40,000 professionals in 40 countries.

In a period as complex as the last two years, the energy company has accelerated its commitment to a green recovery of the economy and employment, with the incorporation of more than 9,000 people since the end of 2019.

If in 2020, the company hired 3,500 people, in 2021 this figure has exceeded 5,600 jobs, of which 36% are under 30 years of age. The firm believes in creating stable, quality employment. It currently provides four times more hours of training per employee per year than the average European company.

Through this commitment to talent, the company has helped sustain a supply chain that employs 400,000 people globally and plans to exceed 500,000 people by 2025.

This commitment to human capital is a consequence of the company's investment efforts and its international growth plans. Iberdrola has a very ambitious growth plan, with investments of 75 billion euros until 2025, with which it will double renewable capacity and advance in smart grids and the electrification of the economy. In addition, this investment plan is associated with the incorporation of 20,000 professionals during this period.

This strategy began two decades ago - with an investment of 120 billion euros in renewables and smart grids - demonstrating how its model is profitable for all its stakeholders. And so, in the last twenty years, Iberdrola has gone from being a local utility to becoming a global energy leader, quadrupling its renewable capacity. All of this has been accompanied by a profound process of geographical diversification and strengthening of the balance sheet. In fact, it generates more than 31.1 billion euros of GDP annually in the countries in which it operates.

In recent years, Iberdrola has consolidated wage equality between men and women. The achievement of this goal is part of the company's strategic plan and of the evaluation criteria of senior management. Currently, female representation represents 42% of the total, above the 20% average in the STEM labour ecosystem.

Since 2013, Iberdrola has become one of the companies with the highest percentage of female directors among Ibex companies: it has 50% of external female directors on its Board of Directors and has set itself the goal of increasing the presence of women in management positions to reach 30% by 2025.

Tell a friend:
Iberdrola hires more than 5,600 people in the last year