Spain presents in Dubai the largest Green Hydrogen plant in 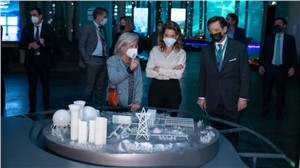 A Spanish delegation, led by the Minister of Transport, Mobility and Urban Agenda, Raquel Sánchez Jiménez, today presented a paper at Expo Dubai 2020 on "The need to accelerate the transformation towards sustainable mobility" with the participation of Santiago Bañales, Director of Iberdrola Innovation Middle East. The World Expo is being held in the capital of the Emirates until 31 March 2022 and features pavilions from 192 countries, among which the Spanish Pavilion stands out for its striking bioclimatic architecture adapted to a desert environment.

The director of Iberdrola Innovation Middle East, Santiago Bañales, in his speech stressed that "the electrification of transport is a critical element in achieving the ambitious decarbonisation targets agreed at COP26".

In its commitment to leading the energy transition, Iberdrola is spearheading the development of green hydrogen with more than 60 projects in eight countries (Spain, United Kingdom, Brazil, and United States, among others) to respond to the electrification and decarbonization needs of sectors such as industry and heavy transport. The company has created a new green hydrogen business unit with which it aims to position itself as a world leader in this technology. The group is thus at the forefront of the new technological challenge of producing and supplying hydrogen from clean energy sources.

During her visit to the Dubai Expo, the Minister of Transport, Raquel Sánchez, visited Iberdrola's model of what is the largest green hydrogen plant for industrial use in Europe, built in Puertollano (Ciudad Real).  With an investment of 150 million euros, the initiative will create up to 700 jobs and avoid emissions of 48,000 tCO2/year. The green hydrogen produced there will be used in Fertiberia's ammonia factory in the town. This will enable the manufacture of fertilizers without using fossil fuels or emitting carbon dioxide, helping to reduce the climate footprint of the agricultural sector.

"Society must know that companies are committed to the fight against climate change", insisted Santiago Bañales. "Expo Dubai 2020 is a showcase to show the world the new technologies and capabilities that companies have to make the energy transition possible. They are windows into the future that we can have as humanity".

"The pandemic has revealed a sense of urgency in transforming the production model and tackling the major problems facing humanity," stressed Santiago Bañales. "Problems must be tackled when there is still a solution; that is why we are anticipating the decisions that the planet must take. Companies must make our investments in response to the challenges that societies present us with, in other words, responding to all the challenges formulated by the United Nations Sustainable Development Goals".

This international event has served to show the world our country's firm commitment to clean energy and decarbonization.

"Iberdrola has also started to produce green hydrogen in Barcelona's free trade zone, which will supply metropolitan buses. As part of its commitment to sustainable mobility, the company has a Global Mobility Plan that includes the installation of 150,000 recharging points by 2025", added the executive of the Spanish multinational. "Our goal is to lead the public charging networks by investing more than 150 million euros in fast-charging stations.

"Within Iberdrola's investment plan to 2030, which totals 150 billion euros, green hydrogen will be a major growth vector. Iberdrola is already developing several projects that will enable the decarbonization of industry and heavy transport in Spain and the United Kingdom, as well as developing its value chain. The group currently has a green hydrogen portfolio that will require investments of more than 3,000 million euros by 2030 for the production of 134,000 tonnes per year. The company has also submitted 54 projects to the Next Generation EU program, which would trigger investments of 2.5 billion euros to achieve an annual production of 60,000 tonnes of green hydrogen.