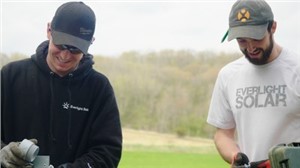 Everlight Solar's first three years of providing home solar solutions in Wisconsin have been nothing short of incredible. As the largest solar company in Wisconsin, Everlight Solar continues to expand its team to meet the demand for sustainable and renewable energy.

Since arriving in February of 2019, Everlight Solar has created more than 100 clean energy jobs in the Midwest. The company is on a continual hiring spree, with plans to increase its team to expand into new markets.

Putting down roots in Madison, Wisconsin, has proven a boon to growth as now thousands of customers in the area have chosen to go solar. "I knew solar was the future in Wisconsin when my family put down roots here, but I don't think anyone expected the solar industry to grow here so quickly," said Will Creech, the President, and CEO of Everlight Solar. "Honestly, it has been amazing to watch."

The company's entrance into Wisconsin has led to a record number of home solar installations. The fast start fulfills Everlight Solar's vision to democratize home solar, making green energy accessible to every homeowner regardless of income level.

"Historically, solar was mostly a luxury only afforded to the rich," said Casey Creech, the Chief Revenue Officer of Everlight Solar. "Now that we have made it available to every homeowner with no out-of-pocket cost, the solar market is exploding with growth.