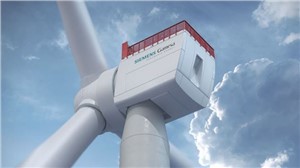 Siemens Gamesa is pleased to announce the next steps being taken with Dominion Energy subsidiary Dominion Energy Virginia for delivery of offshore wind turbines and 10-years of service at its 2.6-GW Coastal Virginia Offshore Wind commercial project. An agreement has been reached planning to use 176 units of the world’s largest offshore wind turbine in operation, the SG 14-222 DD, and for an expected 10-year Service agreement. The agreement is subject to customary conditions, including required governmental permitting.

All items are anticipated to be successfully closed by Q1 2023. Installation of the mammoth project in waters off the coast of the Commonwealth of Virginia is expected to begin in 2024.

The Coastal Virginia Offshore Wind commercial project will also provide a large springboard towards realizing the goal established by the Virginia Clean Economy Act, which requires Virginia to have 100% clean energy by 2045. The project will begin contributing to this upon completion, which is scheduled by 2026.

“This agreement is historic for many reasons, most notably as the next step towards the planned deployment of our flagship SG 14-222 Direct Drive turbine. It also brings our planned offshore wind turbine blade finishing facility in Portsmouth, Virginia, one step closer to reality - the first in the colossal U.S. offshore market. Perhaps more importantly, this marks the point where we prove that as the leaders of the offshore revolution, we begin to write history for a cleaner, greener environment in the United States,” says Marc Becker, CEO of the Siemens Gamesa Offshore Business Unit.

“Siemens Gamesa Renewable Energy brings decades of experience as the global leader in wind turbine technology to our Coastal Virginia Offshore Wind project,” said Joshua Bennett, Dominion Energy Vice President of offshore wind. “Siemens Gamesa is a valued partner on our two-turbine pilot project and will look forward to continued success as we work together to make commercial offshore wind a reality for our Virginia customers.”

Once online, the project is expected to provide enough clean energy to power up to 660,000 homes at rated wind speed, avoiding more than 5 million tons per year of carbon emissions compared to fossil fuel-based power generation. This is another milestone agreement for the United States as it aims to add 30 GW of renewable energy by 2030, enough to provide clean, renewable energy to approximately 12 million average U.S. homes, or 10% of total U.S. households.

“We are delighted to be partnering Dominion Energy on this milestone development, making a significant addition to Virginia’s quest for 100% clean energy through our state-of-the-art turbines. With completion of the development set for 2026, Virginia is setting the standard for rapid decarbonization and energy transition, against which other states will judge their success. Virginia will rightly be able to boast that it has achieved utility-scale energy generation in just a few years, whereas entire countries took decades,” says Steve Dayney, Head of Offshore North America at Siemens Gamesa Renewable Energy.

The prototype of the SG 14-222 DD offshore wind turbine was installed in November 2021 in Denmark and is currently producing power. The world’s largest installed offshore wind turbine, it has a current pipeline in excess of 12 GW in firm orders, preferred supplier agreements, and preferred bidder statuses. It is built on the solid Siemens Gamesa offshore Direct Drive technology platform, of which over 1,500 units have been installed in all major markets.

The 2.6 GW Coastal Virginia Offshore Wind commercial project expands on knowledge gained through the existing two-turbine,12-MW Coastal Virginia Offshore Wind pilot project. The first offshore wind project to be built in U.S. federal waters, it utilizes Siemens Gamesa’s 6 MW SWT-6.0-154 wind turbines with 154-meter rotors. The pilot project has been in operation since October 2020 and is located within a research lease area adjacent to the commercial project site.

Tell a friend:
On Track in the USA: Siemens Gamesa & Dominion Energy Announce Next Step on 2.6 GW Coastal Virginia Project