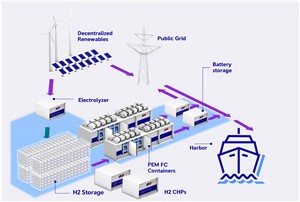 Rolls-Royce will ensure a climate-neutral energy supply at the container terminal currently under construction at the Port of Duisburg, Germany. Rolls-Royce's Power Systems business unit is supplying its latest mtu hydrogen technology for this purpose, to supply the future terminal with electrical energy and heat in a sustainable manner: mtu fuel cell solutions for electrical peak load coverage as well as mtu hydrogen heat and power generation station. To this end, Duisport, one of the world's largest inland ports, is working with several partners to build a hydrogen-based supply network by 2023 that includes several technologically sophisticated options for energy conversion and storage.

Hydrogen as one of the fuels of the future and as an essential building block for the energy transition will play a central role when, in a few years, Duisburg, Europe's largest inland port, shows what the energy supply of the future may look like: decentralized and climate-friendly. The largest container terminal in Europe's hinterland is currently being built on the former coal island, once a transshipment point for bulk cargo. It will not only set new standards in cargo handling but also climate-friendly energy supply. The main role in this project, called "enerport II", is played by fuel cells and mtu hydrogen engines - each with different tasks.

The hydrogen-powered mtu fuel cell solutions supply electrical power as soon as the public power grid reaches its limits, for example for the onboard power supply of ships berthed in the port or the event of other load peaks. In addition, two combined heat and power plants with mtu hydrogen engines of the 4000 series convert hydrogen energy into electrical energy, which is fed into the supply network of the future container terminal or the public grid. The waste heat is used to process heat or for heating buildings in and around the port. Furthermore, photovoltaic systems and battery storage are integrated into the local supply network, which is being realized by the port operator Duisport, Westenergie Netzservice, Netze Duisburg, Stadtwerke Duisburg and Stadtwerke Duisburg Energiehandel together with the Fraunhofer Institute Umsicht. The project is being funded by the German Federal Ministry for Economic Affairs and Energy for four years as part of the "Hydrogen Technology Offensive".