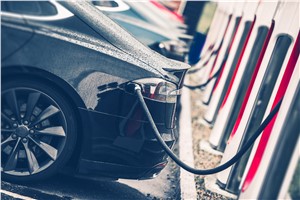 evTS' flagship product, the FireFly® ESV, is a purpose-built, lightweight commercial utility vehicle that is both street-legal and highway-capable. The FireFly ESV is built with safe Lithium Iron Phosphate (LFP) battery technology and an advanced battery management system to improve charging and energy efficiency with up to 10 years of useful life. At the end of its first life, the FireFly ESV LFP battery may still have the remaining battery capacity, but no longer has the efficiency required for use in EV applications. These cells are ideal for a test bench demonstration of Exro's next-generation 90kW ESS, which allows retired EV battery cells to be efficiently reused for stationary second-life energy storage applications.

"By partnering with Exro, we hope to further bolster the environmentally friendly profile of our vehicles – providing our batteries with a second-life as an energy storage system," said Greg Horne, Chief Technology Officer at evTS. "Our FireFly ESV will not only help to drive forward the future of last-mile delivery, as through our partnership with Exro, but we will also help eliminate battery disposal issues and contribute to the circular economy."

Exro's patented BCS is an innovative battery management inverter combined with advanced cell control software that can expand the capabilities of batteries by enabling a great depth of control on the cells. In this case, Exro will pilot a test bench demonstrator that integrates its BCS technology with the FireFly ESV LFP batteries to repurpose the retired battery cells and extend them into a second life in an ESS application. LFP batteries are a growing standard in electric mobility applications because of their safety and reliability advantages while improving access to raw materials. The test bench demonstrator results are expected in Q3 of 2022.

"As electric vehicle batteries reach end of first life, we know there is a growing market for LFP batteries that can be repurposed for second-life energy storage applications," said Sue Ozdemir, CEO of Exro. "EV manufacturers can experience significant cost savings by reviving and utilizing second-life batteries and we're excited to partner with evTS on a pilot project to extend the life of their FireFly ESV batteries while supporting their sustainable electric vehicle repurposing processes."

As Exro and development partner evTS collaborate on the second-life ESS solution, the teams are also evaluating how Exro's intelligent control technology can optimize the FireFly ESV for first-life applications.

Exro is a clean technology company pioneering intelligent control solutions in power electronics to help solve the most challenging problems in electrification. Exro has developed a new class of control technology that expands the capabilities of electric motors, generators, and batteries. Exro enables the application to achieve more with less energy consumed.

Exro's advanced motor control technology, the Coil Driver TM, expands the capabilities of electric powertrains by enabling intelligent optimization for efficient energy consumption. Exro is working with many partners from all over the world to bring their technology to the electric mobility industries and beyond.