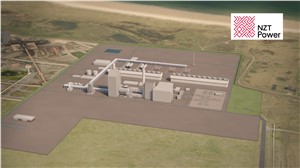 Technip Energies (PARIS: TE), leader of a consortium with GE Gas Power (NYSE: GE), has been selected by bp, on behalf of its partners, to perform a Front-End Engineering Design (FEED) study for the Net Zero Teesside (NZT) Power project and the Northern Endurance Partnership’s (NEP) carbon compression infrastructure in Teesside, UK.

The companies will work together to develop a detailed plan for integrating amine-based carbon capture technologies at scale with a highly efficient natural gas combined cycle plant, powered by an advanced GE 9HA.02 gas turbine. This FEED study – a detailed blueprint and operating business guide - will explore gas and steam turbine equipment enhancements to improve the capture process whilst seeking to minimize the impact to plant output and performance and preserve the value that a gas turbine brings to the grid.

Net Zero Teesside Power will be one of the world’s first commercial-scale gas-fired power stations with carbon capture and will share the CO 2 transportation and storage infrastructure being developed by the Northern Endurance Partnership.

Arnaud Pieton, CEO of Technip Energies,  commented: “We are honoured to have been selected, along with GE Gas Power, our consortium partner, to work on Net-Zero Teesside Power, a flagship carbon capture project in the UK energy sector. Led by Technip Energies, the consortium will be supported by Shell Catalysts & Technologies, provider of the licensed Cansolv CO 2 capture technology and Balfour Beatty, our UK construction partner. Our capabilities in carbon capture projects and technology integration, combined with GE Gas Power’s expertise in natural gas combined cycle plant engineering, operability, and plant integration, will support bp’s goal of developing one of the first decarbonised industrial clusters in the world. This project perfectly illustrates that cross-industries collaboration is central to reaching net-zero targets.”

. Martin O’Neill, VP Strategy at GE Gas Power,  added: “ GE views FEED studies for CCUS projects as a crucial first step in gas plants’ journey towards decarbonisation and we are looking forward to collaborating with bp on such an important effort: capturing and reducing carbon emissions at scale in the UK. GE continues to advance our gas power technologies toward zero-carbon power generation, and part of this evolution includes building upon our experience in the carbon capture space to support carbon abatement for the combined cycle power plants of the future. Through the collaboration with Technip Energies, we’ll develop a roadmap aimed at supporting bp’s goal of developing one of the first decarbonised industrial clusters in the world.”

Stephen Tarr, Chief Executive Officer of Balfour Beatty’s Major Projects and Highways business said: “Today represents a significant milestone in the decarbonisation of the UK. One that further demonstrates how, together, we are harnessing the spirit of collaboration to help shape the ambitions that will help us tackle the climate change challenge. Whilst there is inevitably still more to be done, alongside the consortium partners, we are forging a path towards the sustainable infrastructure of the future; putting our foot to the pedal as we work to build back smarter, greener, and faster.”