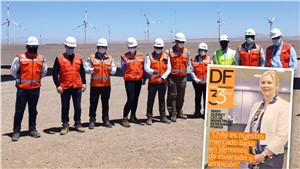 And as well as getting hands-on with the build-out – installing the final PV panel at the Pampa Tigre Solar Farm in Antofagasta, one of ten projects in the platform – she made time to speak to Diario Financiero, the country's respected business and finance newspaper.

The interview, which also featured our Latam General Manager Manuel Tagle, provided an insight into Mainstream's long-term strategy for both Chile and the region as a whole, including its new 1GW hybrid platform, Nazca.

Mainstream Renewable Power landed in Chile in 2008, almost at the same time as the global development of renewable energy began. Then, there was little or no industry in the country, an opportunity that the company saw to start developing wind and solar projects in the territory.

Today, it is considered the largest developer of renewable energy projects, with more than 6,500 MW under development, 549 MW under construction and 804 MW in operation on four continents. Of these projects, 10 are under construction in Chile, which is practically the only base in the region.

However, the firm has already opened a small branch in Bogotá, Colombia, and plans to reach at least one more territory by 2022.