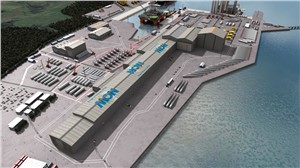 The investment is part of a funding package that will enable the new tower manufacturing facility, located at the Port of Nigg in the north of Scotland, to reach financial close by the end of this year and enter construction in January 2022.

Mainstream's investment and continued focus will ensure that the facility is fully ready to supply towers for the next generation of offshore wind projects which succeed in the 2025 Contracts for Difference (CfD) auction, including those in the current ScotWind round.

"Not only are we helping to fund and expedite the building of a new Scottish turbine tower manufacturing facility, but we are also demonstrating our plans to continue to draw upon the experiences from the world's largest offshore wind turbine supplier, Siemens Gamesa.  Furthermore, we look forward to establishing a route for tier-two suppliers to enter this game-changing sector.

He continued: "Here at Mainstream we are about tangible delivery; this is the second of a number of real actions we are delivering as part of our wider supply chain programme which will secure the best possible economic outcome for Scotland both in the near-term and for the duration of our transition to renewable energy. We have firm plans to do much more."

The £5 million investment is the second strategic element in Mainstream's wider supply chain program for Scotland.

In July, the company announced the revival of its supply chain-led partnership with Siemens Financial Services via Siemens Project Ventures, which includes world-leading technology suppliers Siemens Gamesa Renewable Energy and Siemens Energy as part of the wider development consortium.

The partnership is responsible for the UK's biggest offshore wind supply-chain success story at Hull. The consortium enabled the creation of a competitive offshore-centered economy in the region, including Siemens Gamesa's immensely successful blade manufacturing facility and service hub located at Green Port, Hull, which created 1,000 direct jobs.