EGA and GE to Develop Roadmap to Decarbonise UAE Aluminium Giant's GE Gas Turbines, Including by Switching to Hydrogen 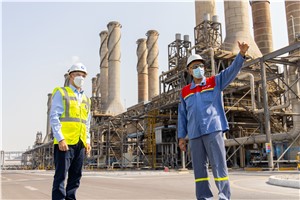 Emirates Global Aluminium (EGA), the largest industrial company in the United Arab Emirates (UAE) outside oil and gas, and GE Gas Power (NYSE: GE) are to develop a roadmap to reduce greenhouse gas emissions from the operation of EGA's existing GE natural gas turbines by exploring hydrogen as a fuel, as well as carbon capture, utilization, and storage solutions.

The MoU between EGA and GE is in line with the UAE Government's Hydrogen Leadership Roadmap ambitions, unveiled earlier this month in Glasgow during COP26. The roadmap will include the development of a strategy to support low-carbon industries to contribute towards the achievement of the UAE's Net-Zero by 2050 Strategic Initiative.

Her Excellency Mariam bint Mohammed Almheiri, the UAE's Minister of Climate Change and the Environment, said: "Decarbonising industries is a major pillar of the UAE Net Zero by 2050 Strategic Initiative, therefore EGA's plan to switch to hydrogen fuel and expand the use of carbon capture, utilisation and storage solutions supports our net-zero drive. With its efforts to reduce the emission intensity of its operations, EGA is a role model in environmental sustainability for the UAE's industrial companies."

The MoU is the first GE Gas Power has entered globally to help explore potential solutions to lower the carbon footprint of power generation operations in the aluminum sector. EGA and GE intend to set up a joint steering committee to create and drive the decarbonization roadmap forward.

Abdulnasser Bin Kalban, Chief Executive Officer of EGA, said: "Aluminium has an important role to play in the development of a more sustainable society, and it also matters how sustainably aluminium is made. Aluminium smelting is energy intensive, and generating the electricity required accounts for more than half the global aluminium industry's greenhouse gas emissions. This work with GE will enable us to determine how we can reduce the carbon intensity of our power generation over the years ahead including by switching to hydrogen, and is an important step in our journey to ensure EGA's aluminium can play its full part in helping the world tackle the generational challenge of climate change. It will also contribute to the achievement of the UAE's Hydrogen Leadership Roadmap."

The decarbonization roadmap will include the following areas:

Joseph Anis, President & CEO of GE Gas Power Europe, Middle East, and Africa, said: "GE has been honoured to support EGA by providing advanced power generation solutions for over 40 years and we are delighted to collaborate with them to accelerate their transition to a cleaner energy future. Using hydrogen as a fuel and adopting carbon capture, utilisation and storage solutions could not only enable EGA to lower the carbon emissions from its electricity production, but also help to continue providing firm power on demand, supplying the reliable energy required to support their operations and growth. The initiative can serve as a model to emulate across various energy-intensive industries that require dependable, low carbon power generation capacity."

EGA is the world's biggest 'premium' aluminum producer, and the company's metal is the largest made-in-the-UAE export after oil and gas.

EGA has captive power plants at Jebel Ali and Al Taweelah to meet its electricity needs and is the biggest electricity generator in the UAE after the Dubai and Abu Dhabi utilities.

The MoU is a continuation of the companies' joint efforts to enhance the sustainability of EGA's operations. In 2017, EGA announced a reduction in its NOx emissions by 16 percent based on total yearly running hours, the equivalent of removing 450,000 cars from the UAE's roads. The 100-day project was part of the Government Accelerators Program. The largest contribution to the reduction came from installing GE's water injection skid to a GE 9B gas turbine at EGA's Jebel Ali power plant.

Tell a friend:
EGA and GE to Develop Roadmap to Decarbonise UAE Aluminium Giant's GE Gas Turbines, Including by Switching to Hydrogen