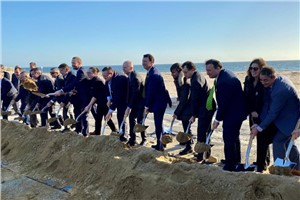 Iberdrola is starting work on the United States' first large-scale offshore wind farm. The project will be 25 times the size of the country's only existing offshore facility, located in Rhode Island.

Vineyard Wind 1 will be operated by Vineyard Wind, a company 50 % owned by the Iberdrola group -through AVANGRID subsidiary Avangrid Renewables- and Copenhagen Infrastructure Partners (CIP).

The 800-megawatt (MW) project is located 24 km from the coast of Martha's Vineyard, and will generate enough wind power to cover the needs of 400,000 households. It will also reduce tariffs by $1.4 million in the first 20 years of operation, while preventing the emission of more than 1.6 million tonnes of carbon dioxide per year, the equivalent or taking 325,000 vehicles off the roads. The other offshore wind farm in Rhode Island has 30 MW installed capacity and supplies clean energy to 17,000 homes.

A ceremony to mark the start of the construction of Vineyard Wind 1 was held in Barnstable county, Massachusetts. The event was attended by Deb Haaland, the United States secretary of the interior, the governor of the State of Massachusetts, Charlie Baker, and other state and local officials. Vineyard Wind CEO Lars T. Pedersen; main partner and cofounder of CIP Christian T. Skakkebæk; and the managing director of AVANGRID, Dennis V. Arriola also attended on behalf of the project partners.

“Vineyard Wind 1 is on a par with the most ambitious offshore developments globally, including those developed by the Iberdrola Group. Not many countries have the ambition to launch their first project at a scale that will power 400,000 homes and create 3,600 jobs,” said Ignacio Galán, Chairman and CEO of Iberdrola and Chairman of AVANGRID. “With 15 years of offshore wind leadership, Iberdrola and Avangrid are more than ready to help the US benefit from the substantial opportunities of offshore wind including economic investment and job creation. Our offshore developments in New England and North Carolina/Virginia could represent a total investment well above $15 billion in the coming years.”

Under the Project Labor Agreement (PLA) with the Southeast Massachusetts Building Trades, the work being done on site is using local union labor.  The PLA ensures that at least 500 of the jobs created during the construction phase of the project will be filled by local tradespeople and includes aggressive hiring targets for women and black, indigenous and people of colour (BIPOC).

“This is the kind of investment from Vineyard Wind that will allow Massachusetts to keep leading the nation towards a clean energy economy,” said Massachusetts senator Edward J. Markey, who took the opportunity to congratulate everyone involved in this unprecedented project.

Iberdrola will invest more than $35 billion in the United States between 2020 and 2025.

It currently has three of the country's most important energy initiatives underway, which will require $11 billion of investment in renewables and grids: the construction of the Vineyard Wind 1 offshore wind farm, the acquisition of PNM Resources in New Mexico and Texas and the development of the New England Clean Energy Connect (NECEC) transmission line.

By 2025, Iberdrola will be operating 13,200 MW of renewable capacity in the United States, 70 % more than in 2020. The company is also investing in network infrastructure to help to decarbonise the economy, which will reach $12 billion by 2025. In addition, the transaction with PNM Resources in New Mexico and Texas -worth $8.3 billion-, will gain the company 800,000 new customers in the country. The latter transaction is expected to receive final approval in the final quarter of 2021.

Global leader in offshore energy production: Europe, United States and the rest of the world

Iberdrola leads the world in the development of offshore wind generation, with more than 38,000 MW of assets. Focused on countries with ambitious objectives, the company expects to have 18,000 MW of offshore wind operating in different markets by 2030.

In Europe, Iberdrola is at the forefront of the offshore wind market with 1,300 MW of operating capacity in Wikenger, Germany and the East Anglia ONE and West of Duddon Sands farms in the United Kingdom. It also has almost 1,000 MW under construction at Baltic Eagle in Germany and St. Brieuc in France. The company also manages a broad portfolio of projects in the United Kingdom, France and Germany, and in new growth platforms such as Ireland, Sweden, Poland and Denmark.

The company is also a leader and pioneer in developing the offshore wind market in the United States. As well as Vineyard Wind 1 (800 MW), the company is stepping up its trajectory with today's agreement to develop more than 2,000 MW of installed capacity with Park City Wind and Commonwealth Wind.

Avangrid also owns the Kitty Hawk development area (2,500 MW) in North Carolina, has already started the BOEM permitting process for the Kitty Hawk North project (800 MW), the first project to be developed in this area, and manages other farms at an earlier stage of development.

Iberdrola is speeding up developments in the United States with the same strategy that it used in the United Kingdom. After four years of initial development with Vattenfall, it took control of almost 4,000 MW of capacity and has since developed the operational East Anglia ONE (714 MW) and East Anglia HUB (3,100 MW) projects.

In the rest of the world, the company is establishing new platforms for growth in a number of regions, with a significant project portfolio in Asia (Japan and Taiwan), and emerging markets, such as Brazil.