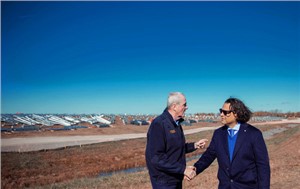 The New Jersey Governor's Office held an event on November 10th, 2021, on the site of a solar field developed by CEP Renewables LLC at the Mount Olive Solar Farm located in Mount Olive, New Jersey. The event, attended by the Governor, the President of the Board of Public Utilities (BPU), the Commissioner of the Department of Environmental Protection (DEP), the Mayor of Mount Olive, and other dignitaries, was held to mark the signing of Executive Order 274 providing for accelerated climate action to decrease state generated greenhouse gas emissions by 50% by 2030, and leading a stronger path to the 80% by 2050 goal.

The location of the signing was particularly apropos given that landfills are a source of climate pollutants. The ceremony also celebrated the commencement of construction of the solar array to be located on the Combe Fill-North landfill, a former Superfund site and the largest landfill solar project in the United States. The solar project will create approximately 200 primarily union labor jobs and will provide enough clean energy to power 4,000 homes annually.

The Governor and his Commissioners took the opportunity to note the close working relationship that must exist with private sector participants such as CEP Renewables LLC to develop and construct clean energy sources such as the Mount Olive Solar Field.

Governor Murphy commented, "The Mt. Olive site used to represent our throw-away culture with all the long-term challenges that way of living produced. Today it represents a more sustainable and energy-resilient New Jersey , and all the opportunities that we are just beginning to realize. With this new more aggressive goal before us, we pull our state into a stronger and cleaner future with all the good jobs that will come with it."

Gary Cicero, the Chief Executive Officer of CEP Renewables LLC, thanked the Governor, the BPU, and the DEP for the collective effort required to make the solar field a reality stating, "Through Governor Murphy's legislative leadership, and the collaboration of Shawn LaTourette, Commissioner of DEP, and Joseph Fiordaliso, President of the BPU, we've been able to make this project a reality, said Gary Cicero, Chief Executive Officer of CEP Renewables. "These are monumental issues we're tackling, but the Mount Olive Solar Project establishes a role model of how New Jersey can transition difficult landfill sites to productive, clean energy sources that benefit communities both environmentally and financially."

Joseph Fiordaliso, President of New Jersey BPU, stated, "We know climate change is a code red. Fortunately, the state of New Jersey has one of the greenest Governors in the US. He is working to bring his vision of New Jersey as a gold standard of renewable energy in the US to fruition. Through our collaboration with state authorities, we will be able to bring a better future to New Jersey ."

The Executive Order highlights the need for more expeditious action in combating the damaging effects of harmful greenhouse gases and air pollution, which threaten public health, safety, and the state's infrastructure and economy, particularly in low-income communities.