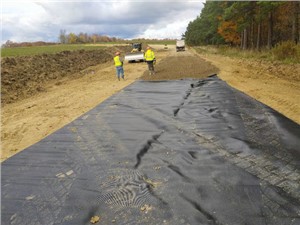 RWE is making significant progress in growing its renewables portfolio in the U.S.: The first phase of its Baron Winds onshore wind farm is under construction. The 121.8 megawatts (MW) project is located in Steuben County in New York State and has the capacity to generate enough clean power for more than 50,000 homes annually.

The project is composed of 24 Vestas and 8 Siemens Gamesa turbines and construction is expected to be complete in late 2022.

The first phase of RWE's Baron Winds onshore wind farm is under construction. The 121.8-megawatt project is located in Steuben County in New York State and has the capacity to generate enough clean power for more than 50,000 homes annually. The project is expected to be completed in late 2022.

"We're thrilled to announce our third project in New York is under construction and will be brought online next year," said Silvia Ortín, CEO Wind Onshore, and PV, RWE Renewables. "The success of this project reflects the state's strong commitment to renewable energy and continues our momentum to providing cleaner sources of generation. The addition of this facility to our operating portfolio is just one example of RWE's strong focus on the U.S. market and further demonstrates our ambition in renewable energy."

In 2018, Baron Winds was one of 26 projects to receive an award from New York State Energy Research and Development Authority (NYSERDA) as part of its 2017 Renewable Energy Standard Solicitation for the purchase of New York Tier-1 Eligible Renewable Energy Certificates (RECs). Each REC represents the environmental attributes of one megawatt-hour of electricity generated from an eligible renewable generation source like solar and will support New York's goal to obtain 70 percent of its electricity from renewable sources by 2030.

"We are pleased to be working with RWE through our large-scale renewables program, and the start of construction of their Baron Winds project reflects another concrete step toward meeting New York's nation-leading clean energy goals," said Doreen M. Harris, President, and CEO, NYSERDA. "NYSERDA continues to work closely with developers, including RWE, to ensure local communities are engaged throughout the development process and can realize the local economic and environmental benefits that hosting renewable projects like this can bring."

"We are happy to be working with RWE to support the Baron Winds project and help create sustainable energy solutions in our County." said James Johnson, Executive Director, Steuben County Industrial Development Agency. "As a leader in renewable investment in the State of NY , this project represents the beginning of an expected $2 billion in investments into renewable energy in our community over the next two years."

Economic impact analysis from the Steuben County Industrial Agency indicates the project will contribute more than $15 million in payments to the local taxing entities, including more than $8 million to local school districts, through the life of the project. In addition, the project will support approximately 300 direct construction jobs and up to seven direct jobs, resulting in more than $60 million of new payroll resulting in a total economic benefit of $90 million to Steuben County over the project's useful life.

The U.S. accounts for more than one-third of the RWE Group's renewables capacity playing a key role in RWE's strategy to grow its renewables business and get to net-zero by 2040. RWE has installed more than 5 gigawatts of onshore wind, solar PV, and storage generating capacity since 2007. This includes projects like the Roscoe complex in Texas, at an installed capacity of 781 megawatts, one of the largest onshore wind projects in the world.

As an established leader in renewables, RWE has entered into a joint venture, New England Aqua Ventus, focused on floating offshore wind in the state of Maine. Additionally, RWE joined in a partnership with National Grid Ventures to explore opportunities in the U.S. offshore wind market. This includes an intention to jointly bid in the upcoming New York Bight seabed lease auction.