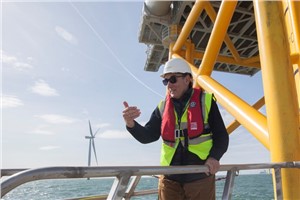 Iberdrola remains committed to the deployment of renewables in international markets. Its third offshore wind project in the Baltic Sea, Windanker, will have 300 MW installed capacity and €800 million total investment. The project will reinforce the company's Baltic Hub in Germany which also includes the operational Wikinger offshore wind farm (350 MW) , and Baltic Eagle (476 MW), under construction. Following a total investment of some EUR 3.5 billion, the Hub will have an installed capacity of over 1.1 GW by 2026, underpinning the company's strategic focus in the Baltic Sea.

On November 4th, the Federal Network Agency (Bundesnetzagentur) confirmend that the Windanker GmbH, a subsidiary of Iberdrola, has exercised its right of entry to the pre-developed site. O-1.3.

Iris Stempfle, Managing Director of Iberdrola Renovables Germany, emphasises: "With this third offshore wind farm project in Germany, Iberdrola is underlining its commitment to Germany as one of the strategically important markets. The realisation of Windanker on a zero-bid basis confronts us with challenges due to the special conditions in the Baltic Sea. We are able to master these challenges through synergies with our Baltic Hub. But until offshore wind energy is fully integrated into the market, we consider an intelligent transitional market design to be necessary."

Thanks to the experience already gained in the Baltic Sea and by using latest wind technology, such as multi-MW turbines (15MW class), Iberdrola will operate the Windanker wind farm highly efficiently. Further advantages could result from the almost simultaneous construction with the East Anglia Hub in the UK and from further planned projects in the European Baltic Sea.

Windanker will come on stream in 2026 and will be the first offshore project in the German Baltic Sea at market conditions. Most of its electricity output is expected to be allocated to long-term power purchase contracts in the German market.