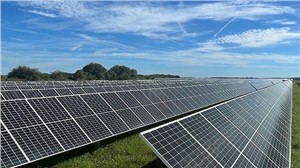 With a combined investment of over $2 billion, Duke Energy Florida’s solar generation portfolio will include 25 grid-tied solar power plants that will benefit all of the company’s 1.9 million Florida customers. These projects will provide about 1,500 MW of emission-free generation using approximately 5 million solar panels by 2024.

“Customers want us to provide more renewable and cleaner energy. As another solar site goes into operation, we’re delivering on that promise,” said Duke Energy Florida state president Melissa Seixas. “These investments will allow Florida customers to enjoy an energy system that is increasingly resilient and provides cleaner energy to everyone in our service area.”

The Duette facility was built on approximately 520 acres in Manatee County, Fla., and was placed in service on Oct. 25 – more than seven weeks ahead of its scheduled completion date. It is part of Duke Energy Florida’s $1 billion investment to provide customers with 700 MW of clean energy by 2022.

The company is well on its way to a major milestone of completing 10 new solar projects by 2022. Eight of those facilities are now in service, while the remaining two are under construction.

Further, the company announced an additional 750 MW of solar generation this year to be completed between 2022 through 2024. This represents another $1 billion investment and the addition of 10 new solar sites. The location of six sites has been announced, with another four sites to be selected in 2022.

Through a reduction in the use of fossil fuels, these 10 projects are projected to lower the emission of global warming gases such as CO 2 at an average rate of over 700,000 tons per year.