''putting People at the Center of the Clean Energy Transitio 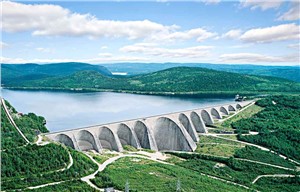 Kahsennenhawe Sky-Deer, Grand Chief, Mohawk Council of Kahnawà:ke and Sophie Brochu, President and CEO of Hydro-Québec: “Putting people at the center of the clean energy transition is key”

Grand Chief Sky-Deer and Sophie Brochu met with community members and leaders in environmental justice communities, where the CHPE will substantially decrease harmful local air pollutants that affect respiratory health currently caused by fossil fired peaker and baseload plants. Specifically, CHPE will decrease by 20% localized air pollutants emitted by burning fossil-fuels for New York electricity generation in its first year of operations. Half of this decrease will occur in New York City, where most fossil fuel peaker plants are located in or near disadvantaged communities.

“Working with our partners in Kahnawà:ke and lending support to our neighbors in New York with our clean energy: that’s exactly the kind of collaborative project that we need for a just energy transition,” said Hydro-Québec President and CEO Sophie Brochu. “It’s all about decreasing the use of fossil fuels but doing it in a way that supports populations, especially the most vulnerable, and keeps pressure on energy costs.”

Building a clean energy project together – from Kahnawà:ke to Queens

Per a Memorandum of Understanding announced in June 2021, the Mohawk Council of Kahnawà:ke and Hydro-Québec will become joint owners of the Québec portion of the CHPE, called the Hertel–New York line, once it is commissioned. This agreement will secure economic benefits for the community over a 40-year term.

With every agreement reached with Indigenous communities over the past decades, Hydro-Québec has sought to innovate. A partnership like the one with the Mohawk community is the first of its kind for Hydro-Québec export transmission infrastructure.

“This is an exciting and innovative project for our community. Kahnawà:ke has a long and vibrant history with the City of New York, helping to build many well-known buildings that are a prominent part of the city skyline. We were there in the building of New York, some of us raised our families in this city, and we assisted after 9/11” said Kahsennenhawe Sky-Deer, Ohénton Íiente ne Ratitsénhaienhs (Grand Chief), Mohawk Council of Kahnawà:ke. “Our ties to New York run deep and we’re happy to enrich that through involvement in the fight against climate change.”

The CHPE will also have significant economic benefits for New Yorkers and support the transition for residents of disadvantaged communities to a clean economy through available funding for green jobs training programs.

Tell a friend:
''putting People at the Center of the Clean Energy Transition is Key''