'The Power of Solar & Wind - the Road to Carbon Neutrality' to Air on Discovery, Science Channel, MotorTrend TV 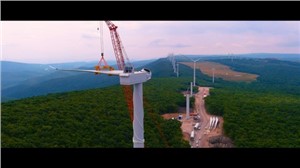 With encouragement from the Biden Administration and the keen support of new US Secretary of Energy Jennifer Granholm, a number of elite U.S. companies have turned to alternative energy sources to power their facilities and operations. Some large-scale fields of solar photovoltaic panels and wind turbine farms are currently under construction, while some are already commissioned and generating clean, emissions-free electricity either for direct or indirect use for large automotive manufacturing plants.

Initiatives to bring clean energy to production sites are explored in this new 60-minute program, which breaks down how these renewable energy systems work for viewers, including an explanation on how the energy is captured, stored, and used inside the plants. It even goes one step further to explain how any excess, unused electricity is fed back to the regional power grid, which can help benefit nearby communities while lowering the carbon footprint of the manufacturing industry.

"The Power of Solar & Wind – The Road to Carbon Neutrality" zooms in to examine the latest science, learnings, and developments undertaken by one of the nation's largest manufacturers aiming to become carbon neutral in its facilities by 2035 in the world premiere set to air on Saturday, October 23 at 6 a.m. (ET /PT) on Discovery, Friday, October 29, at 5 p.m. (ET /PT) on the Science Channel and Sunday, October 31 at 9 a.m. (ET/PT) on MotorTrend TV, timed to match the start of the UN Climate Conference in Glasgow, Scotland.

In addition to installing renewable energy generation equipment directly on its own sites, the world's largest automaker and one of the nation's largest automobile manufacturers, Toyota Motor North America, shows its commitment to have a net positive impact on the environment and society by exploring and entering into Virtual Power Purchase Agreements (VPPAs). VPPAs, where electricity is generated off-site to replace the high emission electricity taken off the grid, create jobs, allow clean energy generation sites to be placed in underserved communities, and provide access to clean electricity by other grid customers. Agreements such as this will allow Toyota to reduce emissions from its North American operations by up to 40% over the next three years.

Of course, coming up with the complex plan was not so straightforward; it was the result of more than six years of research into how best to reduce and replace emissions from Toyota's operations, working in partnership with MIT, the National Renewable Energy Lab, the Rocky Mountain Institute and others. The plan to add more renewable energy is part of a wider effort across the company to reduce the environmental impact of enterprise operations as it also works to limit vehicle emissions.

"We know our collective future – our health and well-being – depends on our ability as a society to focus on collective issues like the reduction of carbon," said Kevin Butt, Toyota Motor North America's environmental sustainability director. "To solve our own puzzle on how to more quickly reduce carbon output from our footprint, we have been aggressively exploring a variety of options to find the one that will best meet our needs, and, in this case, it was clear that we would be able to reduce the most carbon most quickly from a combination of solutions."

How can this change to our climate be slowed down? How can we reduce the CO2 released into the air from the industries we rely on? How can we as a society achieve carbon neutrality?

By first understanding the problem and then bringing together experts to pool their knowledge and resources to offer solutions.

In this program, we will look behind the curtains at Toyota Motor North America where the commitment to be carbon neutral in its manufacturing plants in North America by 2035 is in full force – transferring its manufacturing center energy sources to wind, hydroelectric and solar power. As the world's largest automobile manufacturer, Toyota is setting the tone and providing environmental leadership to its suppliers, dealers, and customers along with a strong message to its future employees at universities and trade schools.

Tell a friend:
'The Power of Solar & Wind - the Road to Carbon Neutrality' to Air on Discovery, Science Channel, MotorTrend TV