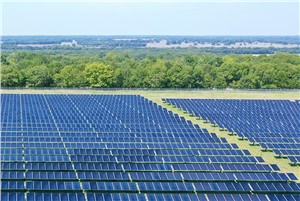 "Phoenix Solar is the latest example of Pattern Energy's expanding activities in solar power and continued investment in Texas . This new solar facility is creating strong benefits with more than $15 million in revenue for Fannin County and the local schools, while producing clean power for 20,000 homes," said Mike Garland , CEO of Pattern Energy. "New renewable energy sources like Phoenix Solar make sense for communities because they are the cheapest form of new power and their investments return jobs, growth and positive economic impact in the rural areas where they are developed."

"We are pleased to further expand our renewable energy portfolio in Texas ," said Digital Realty Senior Director of Sustainability Aaron Binkley . "We place a high priority on sourcing net-new renewables local to our data centers. Phoenix Solar, located less than an hour's drive from our Richardson, Texas data center campus, does just that."

Digital Realty's renewable procurement to date includes 100% renewable energy for its European data center portfolio, 100% wind power for its U.S. colocation business unit and 100% carbon-free and renewable power supplied to several Northern California and Illinois properties. In addition, the U.S. Environmental Protection Agency has recognized Digital Realty as one of the top 100 buyers of renewable energy in the country.

More than 200 jobs were created during construction of the new solar power facility. Phoenix Solar is providing strong benefits for Fannin County , which will recognize both immediate and long-term economic infusions from the project. The new facility is projected to provide more than $12 million in new tax revenue to the Bonham Independent School District and more than $3 million to Fannin County over the life of the project. Additionally, it will contribute revenue in the form of long-term lease payments to project landowners.