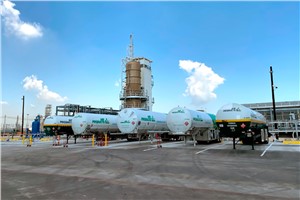 "We invested in this new liquid hydrogen production facility in Texas to show our commitment to our customers and to help meet current and future demand. The addition of this new capacity also will allow us to target the increased growth we anticipate from several markets, namely the hydrogen for the mobility market. The La Porte facility's location and operational benefits provide us with numerous supply options from this plant. We look forward to providing this new reliable source of liquid hydrogen, which is very important to manufacturing and other operations in several states," said Francesco Maione, president, Americas at Air Products.

From its newest commercial facility at La Porte, the hydrogen will be delivered in trailers to customers in industries including: electronics, chemical and petrochemical, metals, material handling, float glass, edible fats and oils, utilities, and the rapidly-developing hydrogen for the mobility market. Air Products recently announced its intent to begin the process of converting its global fleet of approximately 2,000 distribution vehicles to hydrogen fuel cell zero emission vehicles starting in 2022.

The new plant at La Porte will join Air Products' existing hydrogen and syngas production operations, as well as an air separation unit at the site.  The liquid hydrogen plant will connect to, and draw hydrogen to be liquefied from, Air Products' Gulf Coast Pipeline (GCP), an approximately 700-mile pipeline stretching from the Houston Ship Channel in Texas to New Orleans, Louisiana, and capable of supplying customers with over 1.9 billion feet of hydrogen per day from 25 hydrogen production facilities. The vast pipeline includes the supply of blue hydrogen from Air Products' Port Arthur, Texas facility where approximately one million tons of carbon dioxide (CO 2 ) has been captured annually since 2013, transported via pipeline, and used in enhanced oil recovery operations.

Pipelines offer a safe, robust, and reliable supply of hydrogen to industries around the world. Globally, Air Products' pipeline operational expertise is evidenced by its network of systems. Besides the GCP, Air Products also has hydrogen pipelines in California in the U.S., in Sarnia, Ontario, and Alberta, Canada, and in Rotterdam, the Netherlands.