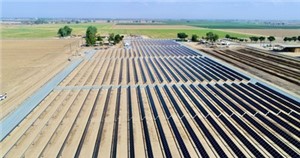 Solar FlexRack™, a division of Northern States Metals and an innovative leader in photovoltaic (PV) mounting and solar tracker solutions, announced that its versatile solar trackers have been installed in over eighty solar projects on California farms, including the latest 2.82 MW project located south of Hanford.

Renewable Solar Inc. (RSI), a leading installer of commercial and agricultural solar projects in the region, installed this solar energy system for Danell Brothers Dairy, which provides the farm owners with over $650,000 in annual savings through reduced utility costs as well as greater energy resiliency amid increasingly severe weather and associated power outages. The U.S. Representative for California's 21st Congressional District, David Valadao, a former dairy farmer, and San Joaquin Valley native, spoke during the ribbon-cutting ceremony for this project about his support for distributed renewable energy systems that are providing critical savings for local farm owners.

"From their versatile and reliable TDP and TDP 2.0 solar trackers to their robust project support services at every stage of each project, Solar FlexRack has, and continues to be, an ideal long-term supplier partner," said Dusty Howze, President of Renewable Solar, Inc. "We're excited to continue to work alongside Solar FlexRack to efficiently execute additional solar energy projects that deliver long-term savings and energy independence for local farmers – all while creating a more sustainable planet."