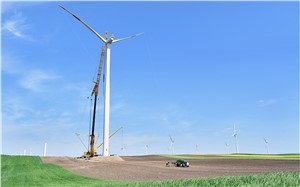 Serbia has recently adopted a renewable energy law and is now preparing detailed regulations which will pave the way for technology-specific auctions for onshore wind and solar PV, using a CfD model.

The conference focused on these new regulations, the auction timetable and volumes – and the huge potential for wind in Serbia and elsewhere in South East Europe.

Serbia currently has 374 MW of onshore wind but has potential for much more. Wind energy can play a significant role in Serbia’s future energy system while also ensuring economic growth and new employment.

With its new renewable energy law Serbian wind capacity is set to grow significantly in the coming years. Not least since the Government is planning 2-sided CfD auctions, which will reduces the costs both to the governments and society.  And it helps also that the Government is planning regular auctions with a clear forward timetable which they plan to announce soon – this will provide the visibility that the industry and investors need.

Expanding wind energy can also provide a significant boost to the Western Balkan’s economies. On average every new onshore wind turbine installed in Europe today generates €7m of economic activity, most of it in the country where the wind farms are located. And the more wind farms Serbia builds the greater the scope for expanding its local wind energy supply chain. Serbia already produces generators and converters for wind turbines in Loher.

Serbia’s neighbours are already tapping the huge potential for wind in the region. With 800 MW of capacity wind is already 10% of Croatia’s electricity.  North Macedonia has set an ambitious target for the expansion of wind and is developing a 400 MW wind farm with the German developer wpd. And Romania is showing the transition to renewables can be a “just” transition having recently opened Europe’s first dedicated training centre to re-skill coal miners to work in wind farms.

Governments across the region should follow Serbia’s example of using technology-specific 2-sided CfD auctions to support the expansion of wind – and of giving clear visibility or how much new capacity is going to auctioned when in the coming years. And they should ensure that the permitting rules and procedures for new wind farms are as simple as possible – and that there are sufficient staff in their permitting authorities to process the growing volume of permit applications.

WindEurope CEO Giles Dickson said: “Wind energy is a great opportunity for Serbia and the wider South East Europe region. Wind is cheap, reliable and will help decarbonise their economies which still rely heavily on coal.  And new wind farms bring a major boost to the local economy. Serbia’s new renewable energy law is a big step forward, together with their plans for technology-specific 2-sided CfD auctions.  We look forward to the Government announcing how much is going to be auctioned when over the coming years – and to the first auction taking place as soon as possible.”

Tell a friend:
Serbia Can Be a Champion of Wind Energy in the Western Balkans