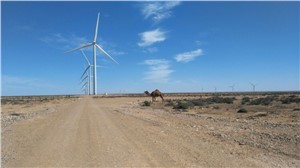 GE Renewable Energy announced today that it has been selected by Energie Eolienne du Maroc (EEM), a leading developer of wind projects and a wholly-owned subsidiary of Nareva Holding, to supply 40 onshore wind turbines for the 200 MW Aftissat onshore wind farm extension in Morocco. EEM will operate the Cypress turbines at 5.0 MW, with a rotor diameter of 158m. GE's scope of work also includes a 20-year full-service contract.

The project is expected to start operations in 2023 and is intended to support industrial companies under power purchase agreements, in line with Morocco’s goal to install 52% of renewable energy capacity by 2030.

This marks the first order in Morocco for GE's Cypress onshore wind platform, the company's largest onshore wind turbine in the field, and GE's largest Cypress wind farm in the Middle East & Africa region. This also adds up to GE Renewable Energy’s 287 MW of installed base and backlog in Morocco, which includes the 200 MW Akhfenir wind farm that Nareva and GE have built together in 2016.

Gilan Sabatier, Onshore Wind International Chief Commercial Officer, GE Renewable Energy, said: “Morocco has a great potential for wind energy and has been an early mover in the journey toward renewable energy integration, achieving great progress in its renewable energy targets. We are thrilled to be partnering with Nareva to implement our Cypress technology in Morocco, confirming our commitment to the country’s wind energy development.”

Since 2009, Morocco has adopted an ambitious energy policy placing renewable energies at the center of the national energy mix. By 2030, the share of renewable resources will have to reach 52% of installed capacity. This is an important turning point for the Kingdom, which is on the way to become one of the most committed emerging countries to the development of wind and solar energy.

GE Renewable Energy is committed to enable the energy transition by supporting the work of its customers. As part of that responsibility, the business is focused on supplying and maintaining a global fleet of renewable energy assets, helping reduce the cost of renewable energy, ensuring grid resiliency, efficiency, and reliability, and making renewable energy function in a more dispatchable fashion. GE Renewable Energy also supports the energy transition by pursuing a strategy that reflects a commitment to sustainable, circular design.