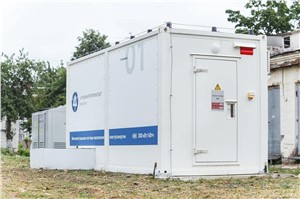 The pilot project is accomplished at the site of ZiO-Podolsk JSC, a large-scale Rosatom’s machine-building facility in Moscow region (a subsidiary of Atomen
Commercial dispatching based on an intelligent energy storage system ensures streamlining of the daily electricity consumption schedule and reduction of capacity payments to the energy provider. The storage unit is physically installed at the site of the end user and supplies electricity to its internal grid during those hours of the peak cost of electricity and capacity. The intelligent part of the system performs predictive analysis of the network load and remotely controls the charge and discharge schedule of the Commercial Dispatch unit. The system features constant improvement of algorithms based on machine learning methods.

The project is based on energy service scheme, it means that the consumer does not need to raise funding to purchase, install and commission equipment, as well as to develop a control system and optimization algorithms.

“According to our estimates, the efficient operation of such intelligent storage devices based on price indicators on the market and the consumer's load curve will reduce the cost of purchased electricity (capacity) by up to 1.2 million rubles per month for each MW of the system output capacity. We see the consumers’ growing interest in our product, a profitable project economy, and we plan to annually launch such storage devices with their simultaneous control from a single dispatch centre managed by our company. Currently, there are some more similar projects under development with a total capacity of 3 MW. The next storage unit will be installed in the short run at one of the industrial facilities of the Tula region,” said Grigory Nazarov, CEO of Atomenergopromsbyt JSC.

“The system has a container design and is adapted for use in the climatic conditions of the Russian regions. For Commercial Dispatch system, we use the most advanced technological solutions, for example, modern lithium-ion cells capable of fast charging and long-term operation at high load. It enables us to reduce the battery size and increase the economic efficiency of the project. In the coming years, energy storage services will be rapidly developing, contributing to growing flexibility of the Russian energy system and reduced carbon footprint,” commented Emin Askerov, CEO of RENERA LLC.

“The Commercial Dispatch storage equipment is a key tool that allows the consumer to accumulate energy at night and consume it during morning, afternoon or evening peaks. This operating mode of the power grid increases the number of hours for using the declared capacity by transferring a part of the main consumption load outside the hours of maximum load consumption from the power grid, and also allows a more uniform electricity interday consumption to build-up a rational daily schedule. This will have a beneficial impact on the economic performance of the power grids in general", noted Andrey Bortnikov, chief power engineer of ZiO-Podolsk JSC.