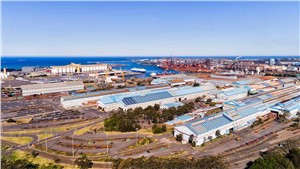 The $1.3 billion project is being developed by the Andrew Forrest backed Squadron Energy and forms part of the company’s wider ambitions to establish a gas import terminal at the New South Wales industrial hub of Port Kembla.

The Port Kembla project, at least initially, will primarily run supplies of fossil gas and will be located within the Illawarra region’s major industrial precinct that already hosts the BlueScope steelworks.

Squadron Energy says that the proposed 635MW power station will have the ability to co-fire with hydrogen, as much as 30 per cent hydrogen by volume during the stages of its operation, with the ability to transition the plant to run entirely on hydrogen by 2030.

Such a commitment would represent a huge boost in demand for hydrogen in Australia and would see the Port Kembla project become the first power station in Australia to use hydrogen as a fuel on a large scale, although EnergyAustralia is also looking to do the same with its expanded Tallawarra gas generator.

Forrest has been outspoken about the need for Australia’s fledgling hydrogen industry to focus on the development of renewable hydrogen supplies, telling a Clean Energy Council event earlier in August that anything else was ‘dirty hydrogen’.

NSW energy minister Matt Kean said the project would have the potential to supply low emissions power to one of the state’s major industrial hubs and would provide a major early boost for renewable hydrogen demand.

“Port Kembla is the industrial engine room of our economy and one of the first hydrogen hubs in NSW,” Kean said.

“If approved, the dual hydrogen-gas design of this project will create early demand for the green hydrogen needed to decarbonise the State’s heavy industries and set them up to succeed in a low carbon global economy.”

Squadron Energy, which is a subsidiary of Andrew Forrest’s Tattarang group of companies, is developing the Port Kembla Gas Terminal Project, which is expected to bring around 100PJ of gas into New South Wales, enough to supply around 70 per cent of the state’s current gas consumption.

“Our ambitions for this project are significant and we see the initial Power Station supporting the development of an emerging green energy precinct at Port Kembla, one that underpins future investment to develop industrial uses of and applications for hydrogen or ammonia demand or renewable energy,” Tattarang chief investment officer John Hartman said.

“We believe this project can be a catalyst for future development of green hydrogen projects in the Illawarra region.”

If it proceeds, the power station is expected to create around 700 construction jobs, and NSW planning minister Rob Stokes said the project would form a key part of the state government’s strategy towards reducing greenhouse gas emissions.

“If approved, the Port Kembla power station will be a critical part of the NSW energy mix as we move to cleaner, greener renewables by firming up supply and keeping energy prices low,” Stokes said.

“The NSW Government has a secure plan for the transition to renewables and the Port Kembla proposal should be declared CSSI because it will be vital to achieving a low-carbon emissions based economy.”

“Port Kembla is one of the State’s most valuable industrial hubs and provides local employment. The proposed gas turbine will support 35 jobs once up and running,” Stokes added.

The project, which is being developed primarily with private investment, stands in contrast with a $600 million gas fired generator being developed by Snowy Hydro, using public funds, that is not expected to include any hydrogen in its operation.

The Port Kembla project has been earmarked for federal government investment through the Underwriting New Generation Investments program, but despite being shortlisted for this funding support in March 2019, a formal agreement has not yet been executed.

The NSW government said that with the expedited approval process, the power station project would be able to begin the preparation of an Environmental Impact Statement, which will undergo an assessment by planning authorities and be subject to a process of public consultation.

The power station would be expected to be constructed by 2024, meaning it is likely to commence operation after the closure of the Liddell power station.

The announcement comes on the same day as the NSW government revealed that it had a huge amount of interest from prospective wind and solar project developers in participating in a New England renewable energy zone.

The NSW government said that it received more than 34GW of proposals, more than four-times what would be needed to meet the government goal of developing 8GW of new projects in the region.