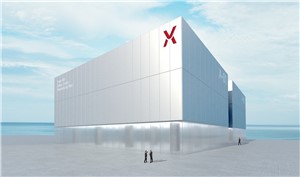 Founded with a vision to change how the world consumes and transfers renewable energy, PowerX today announces its business to innovate power storage and transmission by developing a Power Transfer Vessel to carry electricity from offshore wind farms to shore and also by building a large-scale battery packing facility in Japan to produce EV fast-charging, grid, and marine batteries.

The Japanese government targets for renewable energy to generate 36-38% of the country's power production in fiscal 2030, a major upgrade from its previous plan of 22-24%. This will require a boost of offshore wind power from the current 20MW to 10GW by fiscal 2030 and to 30-45GW by fiscal 2040. Japan is surrounded by deep coastal waters, which limit the potential range for setting up offshore wind farms. PowerX was founded with a vision to change how the world consumes and transfers renewable energy by providing a unique solution that can lift the restriction on power generation location, which will allow a greater flexibility for offshore wind farm locations, especially for an island country like Japan. By driving innovation in the way the world storages and transports energy, PowerX aims to enable an unprecedented energy transmission between any two ports on the planet, and thus accelerates the adoption of renewable energy.

Currently, Paolo Cerruti, Co-founder and COO of Northvolt, Caesar Sengupta, ex-VP and General Manager at Google, and Mark Tercek, former CEO at The Nature Conservancy and Former Partner at Goldman Sachs, are the non-executive directors of PowerX.

PowerX will design and build an automated Power Transfer Vessel with a massive battery payload that is integrated with the ship's controls to transport offshore wind power to shore. An undersea power cable typically requires expensive construction that comes with substantial environmental impacts. Comparatively, the Power Transfer Vessel stands out as it is resilient to natural disasters, requires less time and cost for development, leaves minimal impact on the environment, and therefore is able to expand the potential of offshore wind power significantly.

Most of the world's energy is transported by ships, in the form of fuel such as oil, gas, and coal. 84.9% of Japan's power is generated by burning carbon-based fuels imported by ships (*1). As the world shifts away from fossil fuels, the energy ship of the future will carry electricity from clean and renewable sources, replacing the fuel-carrying carbon ships of today.