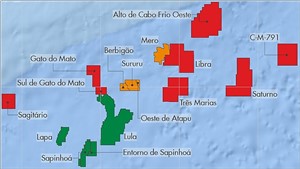 This is the fourth production system to be deployed in the Mero field. Final investment decisions were previously taken for the Mero 1, Mero 2 and Mero 3 FPSOs. Each unit has a daily operational capacity rate of 180,000 barrels of oil/day. The Pioneiro de Libra FPSO (50,000 barrels of oil/day) has been producing at Mero since 2017 and is a key source of information for the Libra consortium to aid further development and optimize productivity of the field, reservoir and wells.

“As a replication of previous FPSOs for the Brazilian pre-salt, Mero-4 is a testimony to the way the Libra Consortium partners are working together in an integrated way to streamline and make our processes more efficient,” said Wael Sawan, Upstream Director, Royal Dutch Shell. “We are proud to continue working alongside our partners to leverage our collective expertise to develop the country’s resources in a competitive and responsible manner.”

Shell’s Powering Progress strategy to thrive through the energy transition includes increasing investment in lower carbon energy solutions, while continuing to pursue the most energy efficient and highest return Upstream investments. In addition to its operations in Brazil, Shell is also the leading operator in the U.S. Gulf of Mexico.