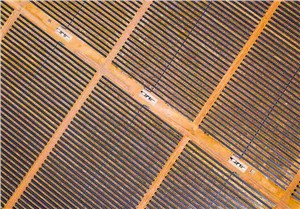 Spanish owned renewables giant Acciona has won approval to build the massive 600MW Aldoga solar farm near the coal port of Gladstone in Queensland, and expects to begin construction in 2022.

Acciona said Thursday that the Queensland government had approved a ‘material change of use’ application for the $550 million solar farm, allowing it to be built on land surrounding the Larcom Creek Terminal Station.

The company said that the approval to utilise more land around the network terminal would allow the size of the project to be increased, help reduce the construction costs for the project, and ultimately lead to lower cost power.

A spokesperson for Acciona flagged the potential for energy storage to be added to the $550 million project, telling RenewEconomy that “we are exploring commercial opportunities for battery storage at Aldoga”.

Acciona said the Aldoga will be one of the biggest solar projects in Australia, and would generate enough electricity to power the equivalent of around 222,000 homes and will create up to 350 jobs during construction and 10 ongoing jobs once operational.

Acciona is also building the country’s biggest wind farm, the 1GW MacIntyre project in Queensland, after landing a contract for much of the capacity with the government owned CleanCo.

Aldoga is being supported by Economic Development Queensland, which will lease the land to Acciona for the project, and the state government’s Advancing our Cities and Regions strategy, designed to better utilise key infrastructure across the state to support new investment and job creation.

The solar farm will be constructed in two phases, with a 315MW first stage, and the remainder of the project (285MW) could be used to supply renewable electricity to major hydrogen production facilities being planned for Gladstone.

While the project has yet to secure an offtake agreement for the electricity produced by the power station, an Acciona spokesperson said early site works are expected to commence some time in 2022.

A company spokesperson told RenewEconomy that Acciona is expecting to grow its portfolio of renewable energy projects, have successfully completing a public listing in Spain earlier in July that valued the company at around A$14 billion.

“Acciona Energia successfully completed an Initial Public Offering in Spain early July this year. Our renewable energy generation portfolio is growing globally, and we are working on a range of development projects in the Australian market,” the spokesperson said.