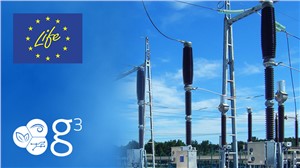 The co-funding reflects the EU’s commitment to accelerate the decarbonization of Europe’s electrical grids and help them get ready for the EU’s stricter fluorinated (F)-gas regulation, which aims to cut F-gas emissions by two-thirds by 2030. GE’s g³ gas is a game-changing alternative to SF6 - a potent greenhouse gas - with a global warming potential (GWP) that is about 99% less compared to SF6.

The new GE air-insulated 245 kV g3 live tank circuit-breaker, which will be based on International Electrotechnical Commission (IEC) standards, is the second g3 gas project co-funded by the EU. In 2019, GE received funding for a g3 gas-insulated 420 kV circuit-breaker, also as part of the EU LIFE Program.

“The EU’s co-funding of a g3 245 kV live tank circuit-breaker will help demonstrate the applicability of GE’s g3 gas for this commonly used voltage level by transmission operators around the world, as well as outdoor applications down to -30°C,” said Vera Silva, Chief Technology Officer at GE’s Grid Solutions. “The new g3 245 kV live tank circuit-breakers, once ramped up together with  420 kV voltage level, will help avoid the addition of some 52,000 tons of CO2 equivalent annually on to the European grid alone and more – as we expect other continents to adopt our g3 gas technology.”

GE’s Grid Solutions teams will work with several European partners on this second EU-funded g³ gas project, including Germany’s Leibniz Institute for Plasma Science and Technology, which will build a scientific database of g³ gas properties. Industrial partners will help optimize the environmental impact of the new circuit-breaker throughout its entire life cycle.

Today, 25 leading electrical utilities have already adopted GE’s g3 products for their high voltage networks, avoiding the addition of more than a million tons of CO2 equivalent to the grid. That’s the equivalent of removing about 476,000 petrol cars from the road for one year.