Vestas Pre-Selected Tenderer for the 900 MW He Dreiht Project in Germany, which Will Use the V236-15.0 MW Turbine 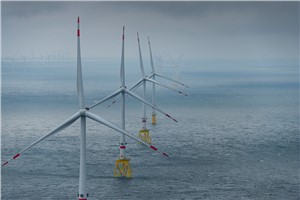 Vestas has been named the pre-selected tenderer at EnBW’s 900 MW He Dreiht project to supply the offshore wind turbines, which, depending on a firm and unconditional order eventually being signed, will mark the world`s first commercial deployment of the new V236-15.0 MW offshore turbine. This means that this highly advanced turbine type has made its mark after only five months on the market.

Vestas was pre-selected through an EU tender process to provide V236-15.0 MW turbines for installation at the project in 2025. The He Dreiht project is located in the German North Sea within 85 km of the island of Borkum and 104 km west of the island of Helgoland.

With the industry’s largest swept area and a capacity factor of over 60% from the 115.5m blades, the V236-15.0 MW turbine will deliver industry-leading park performance for EnBW at He Dreiht. The swept area of the turbine spans 43,742 m2 and depending on site-specific conditions, a single V236-15.0 MW turbine is capable of producing 80 GWh per year.

“Building on our capabilities as the world leader in sustainable energy solutions, Vestas is resolutely back in offshore wind with our industry-leading V236-15.0 MW turbine, and are delighted to be selected as pre-selected tendererfor He Dreiht by EnBW,” said Henrik Andersen, President & CEO of Vestas. “I must pay tribute to EnBW for the close collaboration over the past several months on finding the right solutions for their He Dreiht project, and we are delighted to begin our partnership in offshore wind off the German coast.”

Nils de Baar, President of Vestas Northern & Central Europe, added: “Germany’s offshore wind ambitions for 20 GW by 2030 will require ground-breaking projects and technology, such as the V236-15.0 MW turbine, to be achieved. Through our regional setup, Vestas is continuously striving to build closer relationships with our customers such as EnBW and provide the right solutions that will enable them to deliver the ambitious projects needed to reach offshore wind targets.”

The He Dreiht project will be operated on a subsidy-free basis by EnBW, highlighting the attractive turbine solution Vestas is able to offer through its V236-15.0 MW platform.

Turbines are expected to begin being installed in the second quarter of 2025, with full park commissioning anticipated for the fourth quarter of the same year.If and when the agreement with EnBW materialises in a firm and unconditional order for Vestas, the company will send out a new press release to this effect.

Tell a friend:
Vestas Pre-Selected Tenderer for the 900 MW He Dreiht Project in Germany, which Will Use the V236-15.0 MW Turbine