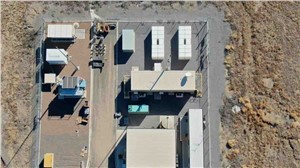 “It’s been much harder than anyone thought it would be.”

So says, with some understatement, the head of asset management at Windlab, Mark Pickering, after the company’s groundbreaking wind, solar and battery storage project at Kennedy Energy Park in north Queensland finally connected to the grid last week after nearly three years of delays.

Kennedy is the first grid-connected project in Australia that combines wind turbines, solar panels and battery storage, and would have been the first in the world too, but for the endless delays that pushed back its connection from the planned start in late 2018, to early this month.

Last week, the project – located near Hughenden – finally injected its first power into the grid, and on Tuesday, for the first time, it will deploy its specially designed “hybrid power plant controller”.

But the frustrations will still continue, because Australia’s market rules don’t actually allow for such hybrids to operate as hybrids. In Australia, a co-located wind and solar farm might as well be on the side of the country.

As RenewEconomy reported last week, the biggest cause of the delays at Kennedy, has been dealing with changes in connection rules and multiple changes in modelling studies.

They are not the only renewable projects to face such a problem, but the complexity of having 42.5MW of wind capacity, 15MW of solar and a 2MW/4MWh battery at the one location has caused greater challenges, even with a synchronous condenser on site.

“The key lesson from this is that connecting complicated hybrid plants in weak parts of grid is much harder than anyone thought it would be,” Pickering tells RenewEconomy.

But that’s not the only issue. Even with the specially designed hybrid power system controller that will be switch on for the first time on Tuesday, the plant will not be able to operate as a true hybrid facility.

At Kennedy, the wind component, the solar component and the battery component have to be separately registered, and each will receive separate dispatch instructions from the Australian Energy Market Operator, rather than a combined dispatch.

“The more sources you have, the more complicated it is to manage,” Pickering says. “The technology allows for it, but the rules are getting in the way.”

This has been known for some time. As RenewEconomy reported back in 2018 in this article, Why battery storage in Australia is unable to back up wind and solar, Australia’s market rules prevent new technologies from doing what most people assume they can and should be doing.

It is an issue raised recently by proponents such as Tilt Renewables, which has been frustrated by the archaic rules as it tries and judge if it’s worthwhile to add a battery installation to its Snowtown wind farm in South Australia.

Windlab, which jointly owns Kennedy with Japan’s Eurus, hopes that changes to the rules are imminent.

The rule maker, the Australian Energy Market Commission, has confirmed that it will unveil draft changes to the rules this week that will allow the various forms of hybrid installations to actually operate as hybrids.

“This is potentially a very important rule change for hybrids like the Kennedy Energy Park,” Pickering says.

“If the new determination allows it operate as a true hybrid, that will be great. It will enable the plant to maximise its output. We really look forward to seeing what the draft rule change offers.”

There are about half a dozen wind, solar hybrids in Australia, either operating or in construction, and about the same number of co-located batteries with wind or solar.

But they are not really hybrids. The best that could be said of them is that they are “co-located”, and all must be operated and dispatched as separate facilities.

“We want to show why combining wind, solar and battery is a smart idea, and this location is highly complimentary for the various resources, with mostly night time wind and daytime solar,” Pickering says.

“This is the first step towards really recognising potential of hybrid technologies.”

The delays to connection was mostly about the vagaries of modelling in an ever-changing environment – changes to rules, the amount of new generation in the local grid, and the understanding of the capabilities of new technologies.

Kennedy has notional capacity of 60MW, but will be limited to a maximum output of 50MW. The battery will help in time shifting and smoothing the output from wind and solar, capturing energy that might otherwise be curtailed. It will also provide contingency FCAS services.

“It’s a real test bed for what renewable and battery technologies can do,” Pickering says of the project, which is backed by both ARENA and the Clean Energy Finance Corporation.

“There will be plenty of public reporting once plant operating and lessons learned on how to build these things.

“The goodwill that all parties have shown in addressing the hurdles that we have come across – from our technology providers, from AEMO, from regulators, from off-takers, and investors and lenders – has kept project on the road.

“There has been a shared interest in seeing this work. Without that we would have not seen the light of day.”