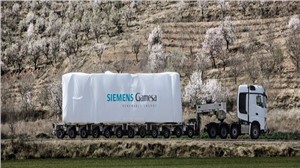 Siemens Gamesa has signed two new contracts that will strengthen its leadership in Spain, where it currently has nearly 15 GW installed, 53% of the country's total capacity. Specifically, a contract with Grupo Jorge to supply seven SG 5.0-145 wind turbines for a wind farm in Herrera de los Navarros (Zaragoza) and another contract, with a different customer, to supply ten turbines of the same model, also in the province of Zaragoza. The two contracts total 17 turbines and a capacity of 85 MW.

The 17 nacelles that make up the two contracts will be assembled at Siemens Gamesa's plant in Ágreda (Soria), the gearboxes will be produced at the plants in Asteasu (Guipúzcoa), Lerma (Burgos) and the city of Burgos, and the electrical components will be produced at the factories in Reinosa (Cantabria), San Fernando de Henares (Madrid) and Benisanó (Valencia). Siemens Gamesa has nine plants in Spain employing 1,200 people, and more than 4,500 employees in total in the country.

The sum of the two wind farms will provide the area with enough clean energy to power nearly 70,000 homes, one fifth of the province of Zaragoza, and will prevent the annual emission of 224,000 tons of CO2, equivalent to the emissions of around 130,000 vehicles. To achieve these CO2 savings, it would be necessary to plant more than three million trees.

"With the signing of these two new contracts, we consolidate our leading position in Spain and show our commitment to the development of renewable energy in the country. In fact, this fiscal year (since October 2020) we have signed several contracts in Spain to install 107 wind turbines with a total capacity of 534 MW, and we are convinced that this number will increase significantly before the end of the fiscal year. The 107 nacelles of these 107 turbines will ensure several months of activity at our plants in Spain, and the 534 MW capacity will be able to supply clean energy to around 420,000 homes and avoid the emission of 1.4 million tons of CO2," said Enrique Pedrosa, CEO Onshore for Southern Europe, Africa and Latin America.

This new project will also boost the activity of Siemens Gamesa's Spanish suppliers, which will be involved in the production of various components. In 2020, Siemens Gamesa's purchases from Spanish companies amounted to €1,253 million, 4% more than the previous year.

Spain, the second country in Europe and fifth in the world in terms of wind power installations, offers one of the highest rates of expected renewable energy growth. The goal set by the government for 2030 is to achieve 42% of final energy use from renewables, compared to 20% in 2020, with the stake of renewable energy in the electricity mix rising to 74%, and to 100% by 2050. New renewable energy auctions in Spain are among the measures planned to help meet this growth in renewables with an estimated allocation of 20 GW by 2025, half of which will be in wind energy.

Tell a friend:
Siemens Gamesa Strengthens its Leadership Position in Spain With the Signing of Two Agreements Totaling 85 MW