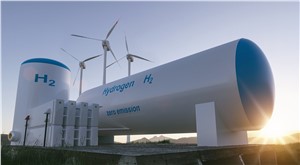 Investment in green hydrogen is enjoying unprecedented momentum as more and more governments cite this zero-emission energy carrier as an essential component of their net-zero climate strategies. For the aviation industry, green hydrogen is expected to play a key role in fuelling future aircraft. However, a green hydrogen ecosystem will need to take shape to ensure its availability to fuel aviation’s future needs.

Today, the road to net zero for many industries runs through green hydrogen. Indeed, this type of hydrogen – when entirely produced from renewable energy – is emerging as the most suitable for a fully sustainable energy transition for hard-to-abate sectors. As governments worldwide set their sights on more ambitious climate-neutrality targets, green hydrogen – derived from water electrolysis in particular – is expected to play a prominent role in the future energy mix.

But as multiple industries increasingly earmark green hydrogen to help achieve their decarbonisation ambitions, one question remains top of mind: will there be enough green hydrogen for all?

Currently, green hydrogen accounts for less than 1% of the total hydrogen produced. However, this is expected to change. The cost of renewable energies is falling at an unprecedented rate. And investment in electrolysers – the “clean” technology used to separate hydrogen and oxygen atoms in water – is booming worldwide. As a result, green hydrogen production capacity could achieve a 50-fold increase in the next six years, according to some estimates. This means green hydrogen could be on track to supply up to 25% of the world’s energy needs by 2050.

And this rapid and cost-effective scale-up could not be more timely: drastic solutions are now urgently required if the world is to meet the 1.5-degree Celsius target of the Paris Agreement.

Airbus fully expects green hydrogen to power its future zero-emission aircraft when it reaches the market by 2035. The challenge today is to support long-term scale-up to ensure there is enough green hydrogen available to fuel the aviation industry’s needs.

Investing in electrolyser capacity worldwide
Transitioning green hydrogen from a niche player to a competitive and widespread low-carbon energy juggernaut will require significant investment to scale up capacity. And signs point to a positive trend on this point.

The International Energy Agency (IEA)’s Hydrogen Projects Database counts nearly 320 new green hydrogen production demonstration projects worldwide. This amounts to a total of about 200 MW of added electrolyser capacity. And new projects are being added on almost a weekly basis.

In Europe, less than 1 GW/year of electrolyser capacity has been installed with another 1.5-2.3 GW in planned projects. However, the European Commission recently announced longer-term plans to install at least 40 GW of electrolyser capacity or up to 10 million megatons of green hydrogen by 2030. As part of these plans, larger electrolysers – with up to 100 MW capacity as opposed to the current 20 MW capacity – are expected to be built by 2024 and installed next to demand centres. If achieved, this would transform Europe into the world’s largest producer of green hydrogen.

But Europe is not alone in its ambitions: other countries are demonstrating they are not far behind. Australia has one of the world's highest volumes of green hydrogen production capacity, including about 30 GW of projects in the pipeline. In Asia, the region’s electrolyser capacity could reach +10 GW over the coming decade, driven by demand from Japan, South Korea and China. Across the pond, the USA is also starting to catch up with plans to develop green hydrogen mega-projects in California, Texas and Utah.

The leap from megawatt- to gigawatt-scale projects is not only a harbinger of the expected enormous future demand for green hydrogen but also the anticipated decline of costs through economies of scale. According to a report released by the International Renewable Energy Agency (IRENA), green hydrogen production costs have already begun to fall largely due to a decline in renewable energy costs and further cost savings in electrolysis facilities. For green hydrogen to be cost-competitive, these costs will need to continue to fall from 40% in the short term to 80% in the long term.

Tell a friend:
The Green Hydrogen Ecosystem for Aviation, Explained