When the Utilities Left Him Stranded, a Homeowner Went Off-grid With Solar + Storage 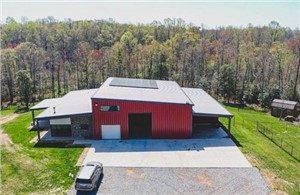 Many homeowners might have given up and bought a different home when faced with the utility hassle that landowner Derrick Zearley experienced. Instead, he looked to solar + storage to avoid interconnection altogether.

Zearley purchased land located on a boundary of two utility territories in Anderson County, South Carolina — Duke Energy and its energy cooperative Blue Ridge Electric. That led to a back-and-forth between Duke and Blue Ridge to determine whose territory it actually was. When Duke Energy laid claim to the plot, the next step in the process was getting signed petitions from Zearley’s neighbors to give right of way on their properties to run electricity to the site.

But after distributing the petitions, no neighbors signed. With half a year lost to the utilities and unwilling neighbors, Zearley reached out to Palmetto State Solar (now Firefly Solar), an installer based in Greenville, and pitched the idea of an off-grid solar system to be built for, and alongside, a 5,500-sq.-ft building in an unelectrified remote location in South Carolina.

“I’m somewhat of a cowboy, so I was interested in the challenge and kind of being able to give the utilities the middle finger after they gave us the run-around,” Zearley said.

Residing in a remote location like this usually comes with additional energy conservation requirements, such as limiting household electricity usage to when solar panels are receiving the most sunlight. But Zearley didn’t want an off-grid home with energy limitations. He wanted to build a full home with an attached workshop that electrically functioned on his own terms, with power after sunset — not a cabin or a trailer that relied on a few measly kilowatts of solar power.

Raising a solar-powered barn
Firefly Solar didn’t have much experience with off-grid projects prior to this one.

“We get calls from time to time from people who want to go off grid, but for the most part it’s not feasible, primarily from a financial perspective,” said Aaron Davis, owner and president of Firefly Solar. “So, when Derrick called, I went out and visited him and I sort of threw out some rough numbers of what he might expect, and he was willing to get into that, especially because of the difficulties he had with the utility companies.”

Zearley’s home resides on a 27-acre property, with about six acres being open yard. The building he wanted was a pre-engineered steel structure with a single slope roof in a color that takes inspiration from red barns found in farming communities. Zearley likened it to “barndominiums,” which are similarly wrought structures known for ease of construction through prefabrication and energy efficiency.

“I think it piqued my interest once I learned that he thought the technology was available, but no one’s really done it yet in our area, and so there wasn’t anything really to mimic, to design after,” Zearley said. “It was kind of an interesting challenge, I think, for the both of us to figure out how to do this. Then once we started going down this road, I told the energy companies that we didn’t need them anymore.”

Firefly lucked out, because when Davis reached out to Tesla about the project, the company was just starting an off-grid program. Previously, the warranty language on Tesla storage hardware didn’t cover off-grid applications. Just as the Powerwalls were being installed, Tesla was rewriting operating code to make the hardware work in this application.

“Derrick approached this with kind of a ‘no compromises’ attitude and what he wanted was basically a home that was off-grid but didn’t seem like it was off-grid,” said Ryan Wagler of Firefly Solar, who was the design project manager on this project. “Typically, with off-grid you’re talking about, ‘All right, we need to limit your usage and we need to install LEDs everywhere.’ With this, we really just went for it and we installed the capacity to handle the everyday usage of a home of this size, and that was new for me.”

The building’s roof is angled flatter than typical pitched rooftops, but the surface area made it possible to fully conceal the 60 modules from observers at ground level. The panels are mounted flush to the roof and the system is slightly oversized to compensate for the angling, using Panasonic 96-cell modules, hardware that Firefly has used extensively.

“Amidst all the uncertainty, we felt we needed some products we could trust,” Wagler said.

Outside of the challenges presented by installing solar with new construction on an off-grid site, Firefly was also working alongside several other trades. Davis said, at one point, there were seven different contractors onsite. Since there was no electricity on the property yet, everyone was running off of gas-powered generators. That is, until the solar was installed, then all the trades could run their equipment without generators.

Retrofitting a home to be off-grid usually comes with the added challenge of compensating for switching out existing electrical appliances and equipment that are high energy. Heating and cooling systems, well pumps and other necessary home loads require a lot of power at startup.

In Zearley’s case, with new construction, it was possible to make sure every major electrical load used a soft starter for less initial voltage, since every building trade was present at the same time.

“Now, trying to get the electrician, the HVAC guy, these different components of construction together because they had absolutely never dealt with anything like this before. It was a bit of a challenge,” Zearley said.

Still, Firefly contractors were able to ensure everything from the well pump to garage door openers were on soft starters as they were being put in.

“The opportunities outweigh the challenges in this case, because we were able to build in exactly what we needed to the system,” Wagler said. “If you can have some input into how those things are chosen, you can actually make a big difference in how the system works and functions down the road.”

An off-grid home and workshop without energy compromise
Zearley ended up with the home he and his wife hoped for. Seven-foot storefront glass windows look out into the wooded property and meet a concrete slab floor that matches the countertops of the kitchen.

The roofline extends past the structure, creating a covered porch. The windows open garage door-style to bring the outside in when the weather’s fair. The shop, or as Zearley described it, his “man cave,” is open air, and a section of the home protrudes into the building, creating a mezzanine where they can look down into the space.

And solar is powering it all, with energy storage keeping it running after sunset.

“It’s just a neat feeling to be in the house and know that you’re responsible for generating your own energy,” Zearely said.

Projects like this demonstrate that solar + storage technologies can be a viable, consistent energy source even in larger applications.

“I think there’s going to be the microgrids and small communities with distributed energy resources all sort of coming together,” Davis said. “There will be a lot more control as this evolves, and a lot more people breaking away from monopoly utility companies. I think a lot of this depends on the research and development that goes into storage in the coming years.”

Tell a friend:
When the Utilities Left Him Stranded, a Homeowner Went Off-grid With Solar + Storage