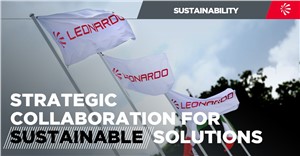 A sustainability agreement that has safety benefits to Italy’s national electricity supplies has been signed by Enel X and Leonardo. Under the agreement, energy assets’ use of the Leonardo Aircraft Division plant in Cameri (Novara) will be optimized, by feeding, upon request, into the country’s national electricity grid the energy which is not absorbed by production activities, the power equivalent of up to 2 MW, which is equal to approximately 650 households.

Thanks to Enel X’s Demand Response (DR) solutions for monitoring and verifying the quantity of energy fed into the grid by the trigeneration plant, the Leonardo site in Cameri, compatible with its industrial needs, will be able to transfer unused flows to the national electricity grid. This forms part of the national dispatching project promoted by the grid operator Terna, which is dedicated to UVAM (Mixed Enabled Virtual Units). The DR programs encourage the adaptation of energy consumption by end users and contribute to the stabilization of the network as required by the system.

The site at Cameri is the first example of a broader collaboration between Leonardo and Enel X in improving the efficiency of energy use on a national scale. The project may be further developed with new Energy Management initiatives that are aimed at the optimal use of energy used by Leonardo in favor of the safety of Italy’s national electricity system.

“We are particularly pleased to be able to support Leonardo, one of the largest companies in the country, on its path towards sustainability. Enel X’s innovative Demand Response services will allow the group to maximize the benefits of operating the Cameri trigeneration plant, while providing essential support to the safety of the electricity grid,” said Francesco Venturini, CEO of Enel X.

“The contribution of a technologically advanced asset such as the production plant in Cameri to the national electricity grid represents one of many concrete examples by which Leonardo actively supports the country system,” said Lucio Valerio Cioffi, General Manager of Leonardo. “Joining the Demand Response project further enriches our Energy Management initiatives which represent one of the levers of Leonardo’s sustainability path, in line with the Company’s energy efficiency objectives.”

The agreement has benefited from the exemption of application of the rules on transactions between related parties, as it is a transaction of a small amount pursuant to this discipline.