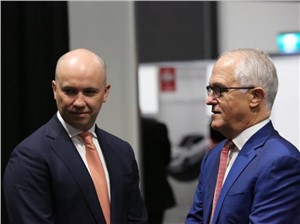 Former prime minister Malcolm Turnbull has dismissed hydrogen produced using coal and gas as a ‘delaying tactic’ of the fossil fuel industry in a speech that also slammed the Morrison government for lack of budget support for clean energy.

Speaking at the Smart Energy Conference in Sydney on Wednesday, Turnbull also dismissed the prospects of carbon capture and storage technologies ever becoming a viable option in the energy system, saying it was only reasonable to support green hydrogen produced using renewable energy.

“Blue hydrogen is where you get the hydrogen from fossil fuels, and you store underground or sequestrate the carbon dioxide. It is BS,” Turnbull said.

“I’m old enough to remember when we thought carbon capture and storage would work. I really am, and we were, sincere.

“Fifteen years ago, ten years ago, even the CSIRO thought it had a chance. But it does not work, other than in some very specialized situations. So, basically, blue hydrogen is another delaying tactic by the fossil fuel sector,” Turnbull added.

Because of this, Turnbull said, hydrogen produced using renewable energy was the only viable path forward for the hydrogen industry.

“We’ve got to stop tippy-toeing around this. We’ve got renewables plus storage as the answer to electricity. As far as hydrogen is concerned, it is green hydrogen. There is no other colour that you can responsibly support,” Turnbull told the conference.

Turnbull’s comments were echoed by John Grimes, the CEO of the Smart Energy Council, who said that fossil fuel hydrogen was “a road to nowhere”. The SEC is leading the creation of a certification program for green hydrogen.

Commenting on the latest federal budget delivered on Tuesday evening, Turnbull said that he thought the budget gave him nostalgia for his time as prime minister, given the budget largely incorporated clean energy initiatives originally announced by his government.

“It was a bit nostalgic for me, that budget because the only clean energy projects that were named was Snowy 2.0 and the Tasmanian Battery of the Nation project, both of which I announced in 2017,” Turnbull said.

“Now that’s four years ago. That is an eon in the energy transition and in politics, but nothing new has been proposed or got underway. Even Battery of the Nation is still there, but there’s nothing actually being built yet.”

“So I was disappointed, frankly, in the budget.”