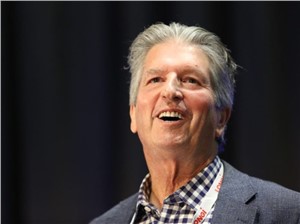 Solar photovoltaic pioneer Professor Martin Green says solar module prices will continue to plummet, reaching 10 US cents per watt by 2023, around half their current prices, resulting in what he called “insanely cheap electricity.”

He said this would translate into power purchase agreements “routinely” worth just 1 cent per kilowatt hour. He said this is around one-fortieth of what Sydney residents like him are currently paying.

Speaking at the Smart Energy Council in Sydney, he said this could lead to a massive proliferation of solar energy, which would pose a new problem: what to do with all the surplus solar-generated electricity when traditional demand is low?

He called this curtailed energy “super-power”, and said if Australia could figure out ways to use it in innovative productive ways – an example might be to generate green hydrogen – it could drive the price of electricity down even further.

Referencing economist and renewable energy advocate Ross Garnaut’s book “Superpower”, he said it could also could make Australia a “super-powered superpower” of renewable energy, exporting that curtailed energy – in whatever form – around the world.

Professor Green was famous for predicting in the early 2000s that the cost of solar would drop to $US1 by 2020. At the time this seemed like a wildly optimistic prediction.

But a sudden surge in PV manufacturing in China, driven by investment from around the world, proved that prediction far too conservative, pushing the price from above $4 in 2008 to below $US1 per watt by 2012. The wide take-up of the cheaper “PERC” technology – a technology that Green and his team of researchers at the University of New South Wales designed – further drove costs down.

“The International Energy Agency’s been quite slow to recognise the potential of renewables, but last year they said solar now offers some of the lowest cost of electricity,” he said.

“We’re about 20 cents a watt in US dollars, … but the momentum is still going so I think we’re going to continue on this type of trajectory. So, at the cost reduction rates they’re 20-24 per cent a year. It takes about three years for the cost to halve. So I’m fully expecting that by about 2023 We should be at 10 cents for one module from a projection like this.

“So, what do you call the electricity then if it’s already the lowest cost the world has seen? Now, if we halve the cost further, what can we call it then? One of my colleagues has called it insanely cheap electricity.

“My prediction is we’ll see over this coming decade and perhaps in even by the middle of the decade, we’ll see power purchase agreements at less than one cent per kilowatt hour routinely, and module prices, we’ll see “them at less than 10 cents a watt,” he said.