Vestas to Expand Wind Power Capacity in the Faroe Islands 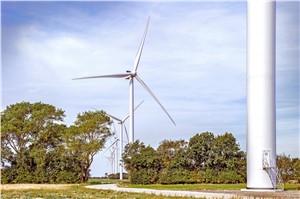 Vestas has secured an order for turbine supply at the 25 MW Torshavn onshore wind project, located just outside the capital of the Faroe Islands, from Vindrøkt Sp/f, a special purpose vehicle owned by Røkt and Effo.

Six V117-4.2 MW Vestas turbines will power the Torshavn project, which will more than double the total wind energy capacity of the Faroe Islands. The turbines will rise to a hub height of 91.5m, and will have a high wind operation mode applied, due to mean wind speeds of over 9 m/s found at the site. Turbines are due to be delivered and commissioned by the end of 2021.

Vestas will also provide service for the project through a long-term 20-year Active Output Management 5000 (AOM 5000) service agreement, providing power performance certainty and Vestas’ industry-leading service expertise throughout the lifetime of the project.

“We’re pleased to be working with Røkt and Effo to deliver our V117 turbines to the Faroe Islands in 2021 for their Torshavn project,” said Juan Furones, Vice President, Sales North & West, Vestas Northern & Central Europe. “As the Faroe Islands advance toward the objective of having all Faroese electricity needs powered through renewable energy by 2030, projects like this are key markers of progress. Vestas is proud to be playing its part in the Faroese renewable energy conversion”.

Jóhan í Niðristovu, CEO, at Røkt, added: “Røkt was the first company to erect wind turbines on a commercial basis in the Faroe Islands. Back then, in 2003, we decided to work together with Vestas, so we are very pleased that we have reached an agreement with Vestas to continue that cooperation”.

Janus Thomsen, CEO, at Effo, said: “As an energy provider in the Faroe Islands for the last 100 years, we work hard to continually develop and implement new sustainable energy solutions to our customers. Therefore, we are delighted that this project with Vestas was secured. This is a project which will take the sustainable production of electricity in the Faroes from 40 to 67 percent”.

Røkt and Effo, who were awarded the project capacity through the local state auction, are developing the Torshavn project. Vestas previously provided turbines to the Vindrøkt-owned Vestmanna project in the Faroe Islands, which includes three V47-660 kW turbines.

Tell a friend:
Vestas to Expand Wind Power Capacity in the Faroe Islands