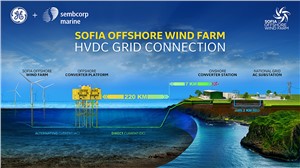 A specially formed consortium of GE Renewable Energy’s Grid Solutions and Sembcorp Marine today announced they have been awarded the full contract to supply a state-of-the-art high voltage direct current (HVDC) transmission system for Sofia, one of the world’s largest offshore wind farm projects. Once operational, Sofia, located in the North Sea 195 kilometers off the coast of the North East of England, will be able to generate enough wind energy to meet the electricity needs of almost 1.2 million average UK homes.

The HVDC transmission system represents Sofia’s second largest contract and will include the design, manufacture, installation, commissioning and maintenance of the offshore converter platform and the onshore converter station, including all ancillary equipment. Construction of the wind farm is set to begin onshore at its Teesside converter station site this year, with offshore construction expected to get underway in 2023. Teesside, an ideal location to serve the vast offshore wind potential of the North Sea, will also be the future home of GE Renewable Energy’s new blade manufacturing plant.

GE’s Grid Solutions will be leading the consortium for the engineering, procurement, construction and installation of the system’s two HVDC converter stations capable of transmitting 1,320 megawatts (MW) of power at 320 kilovolts (kV). The offshore converter station will be the most powerful ever built and will be installed 220 kilometers from shore, which will also make it the most remote.

The selection of the consortium is positive news for the UK as a significant percentage of all the primary HVDC equipment will be manufactured at GE’s Grid Solutions’ Stafford facilities in the West Midlands, which employ more than 1,000 workers.

Sven Utermöhlen, Chief Operating Officer Wind Offshore Global of RWE Renewables said: "Signing this contract with the consortium of GE’s Grid Solutions and Sembcorp Marine for the supply of Sofia’s HVDC electrical system reflects RWE’s strong commitment to innovation and to pushing the boundaries of what is capable within the sector. The 1.4GW Sofia project is our first to use the HVDC technology, which was selected to maximize the wind farm’s export capacity from a location so far from shore. We are delighted to be working with such a strong pairing on the delivery of this flagship project located on the remote Dogger Bank, in the middle of the North Sea."

The project will be based on GE Grid's latest HVDC technology, which utilizes its second-generation voltage source convertor valve, and will also feature the first application of its state-of-the-art eLumina™ HVDC Control System. eLumina is the industry’s first HVDC solution to use a digital measurement system fully based on International Electrotechnical Commission (IEC) 61850, an important international standard defining communication protocols for intelligent electronic devices at electrical substations.

"As the HVDC consortium leader for the Sofia Offshore Wind Farm, we are excited to move ahead with this project," said Raj Iyer, Grid Integration Leader at GE’s Grid Solutions. "The award of Sofia and operational success of DolWin3 offshore wind HVDC last year are evidence that GE’s Voltage Source Converter technology is now well established, and that GE has the ability to commercially deliver on this latest and most advanced HVDC technology."

Construction of the offshore converter platform will start this year and will be designed, built, installed and commissioned by Sembcorp Marine. Located at the heart of the wind farm, it will comprise a 17,000-ton topside and a jacket foundation structure piled into the seabed. The onshore converter station will convert the electricity generated by the wind farm to 400 kV alternating current (AC), before it enters the UK national grid.

Samuel Wong, Head of Sembcorp Marine Offshore Platforms said: "Sembcorp Marine is excited to work on this mega-project with GE Renewable Energy’s Grid Solutions to support RWE Renewables’ Sofia Offshore Wind Farm project to augment its supply of wind energy in the UK. We are grateful to RWE for its vote of confidence in Sembcorp Marine’s capabilities and outstanding track record of delivering offshore platforms to major field developments in Europe and Asia."