How Siemens Energy Is Targeting the US Green Hydrogen Opportunity 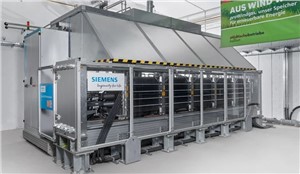 Green hydrogen is both an untested and a potentially vital way for renewable-energy-powered grids to store their intermittent power for later use, not just for hours at a time, but for days, weeks or even seasons ahead. Most of the early-stage work on hydrogen’s grid storage potential is happening in Europe and Asia, but the U.S. does have a few projects taking steps toward proving out the concept.

Take the Intermountain Power Project, the coal-fired power plant in Utah converting to turbines that will use natural gas blended with 30 percent hydrogen, a proportion that will rise to 100 percent hydrogen over the coming decades. That 840 megawatts of generation capacity, serving customers including California’s Los Angeles Department of Water and Power, could become a source of increasingly low-carbon energy fueled by hydrogen stored in massive underground caverns — if the systems to use renewable energy to convert water to hydrogen via electrolysis and store it for later use can combine in a cost-effective way.

On Monday, Siemens Energy announced a U.S. Energy Department grant-funded project to study how its Silyzer electrolyzers could be combined with hydrogen compression, storage and power plant controls technology to meet those goals at Intermountain. It’s the latest of three grants to the energy systems spinoff of the German industrial giant to test its hydrogen technology in the U.S., including a small-scale pilot with Southeast utility Duke Energy and South Carolina’s Clemson University, and another to design, build and test a compressor system to integrate hydrogen into existing fossil fuel generation.

Siemens Energy is among global power systems giants such as Mitsubishi Power, General Electric and Wärtsilä designing a new generation of turbines and engines to run on hydrogen. While Mitsubishi won the contract to supply turbines to the Intermountain project, “we have a good shot to create the hydrogen” to fuel them, Richard Voorberg, vice president of global service operations for Siemens Energy, said in a December interview.

Siemens Energy is also supplying the steam turbines, alongside GE gas-fired turbines, for a $65 million, 20-megawatt green hydrogen project being built by Florida Power & Light, the utility subsidiary of NextEra Energy, the country’s biggest renewable energy developer, Voorberg said. That project envisions turning excess solar into hydrogen to augment the natural-gas supply for FPL’s 1.75-gigawatt Okeechobee power plant, and it could be online by 2023.

Siemens Silyzer technology, meanwhile, is competing with a host of electrolyzer technologies seeking to capitalize on major governmental targets, starting with the European Union’s 2030 target to deploy 40 gigawatts of electrolyzers within its own borders and another 40 GW in neighboring countries.

The U.S. green hydrogen market landscape
The U.S. lacks a national hydrogen energy strategy like Europe’s, or like South Korea’s plan to have 15 gigawatts of hydrogen-powered fuel cells by 2040 and become the world’s largest fuel cell-powered vehicle maker by decade’s end. But U.S. power plant operators are starting to expand their ambitions. In September, three groups including Intermountain announced their intention to buy about 3,300 megawatts of hydrogen-capable turbines and hydrogen generation and storage systems from Mitsubishi.

Utilities facing the challenge of decarbonizing their power systems see green hydrogen as an important addition to batteries to store wind and solar power for use when the wind isn’t blowing and the sun isn’t shining. The earliest entrants into the field have access to large underground salt domes now used for storing fossil fuels that could be converted to storing hydrogen, like Intermountain and New Orleand-based utility Entergy.

Massive storage capacity is key to the promise of using hydrogen at scales that could allow power plants now burning natural gas to tap the carbon-neutral gas to fire turbines for days or weeks at a time. Today’s lithium-ion battery technologies are limited to about four to eight hours of storage capacity, and overbuilding enough battery capacity to cover longer periods of time would drastically expand costs.

That limitation is driving research into longer-duration energy storage, from novel battery chemistries to kinetic or thermal storage systems, that could help replace the need for fueled generation to ensure reliable grid power amid the global push to decarbonize generation. Major U.S. fuel cell makers including Bloom Energy and Plug Power are expanding into electrolyzers to provide the green hydrogen to fuel on-site and distributed electricity generation, as well as to serve carbon-free transportation.

“That becomes pretty expensive,” he said. “One of the challenges we’ve got is how to increase the efficiencies,” whether through reducing the cost of clean power and electrolysis systems or by capturing additional uses for the energy outputs involved.

Siemens Energy’s project with Duke and Clemson, for example, is testing the value of capturing excess heat from a 15-megawatt turbine to supply the university campus district heat system, he said. It’s also examining the value of generating and storing hydrogen on-site, to allow the campus grid to maintain low-carbon power production amid larger grid failures.

Whether or not the economics of using excess renewable energy to generate hydrogen can pencil out may well depend on how market structures are developed to integrate it. Using only excess wind and solar power to generate hydrogen may underutilize the capital costs of the electrolyzer, storage and transport infrastructure needed to put it to use.

But the resulting stored energy could also reliably provide power for rare but critical gaps in renewable power supply, putting the onus on policymakers and energy regulators to create structures that can support it, Michael Liebreich, CEO of Liebreich Associates and the founder of BloombergNEF, wrote in an October blog post.

Duke Energy, one of a growing number of major U.S. utilities pledging zero-carbon emissions by 2050, is looking for opportunities to test the reliability and economics of hydrogen-powered turbines as one of the “emerging technologies” it will rely on to reach its goal, Voorberg said.

Converting the nation’s natural-gas power plant fleet to a fuel that’s only being produced at a minuscule scale today will require “a scale-up of epic proportions,” he said. “This is a market that will dynamically change. None of us know quite what it will look like.”

Tell a friend:
How Siemens Energy Is Targeting the US Green Hydrogen Opportunity