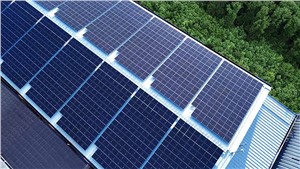 The small town of Heyfield, 200km east of Melbourne, will be the guinea pig for a new micro-grid technology trial that will reduce its dependence on the main grid, and help it rely more on local renewable energy and battery storage technology,

The town, just 25kms north of the huge Portland smelter, and with a population of just over 1,000, has offered itself for a three year feasibility study funded by the federal government and led by the University of Technology Sydney.

The aim is to create a high-tech microgrid combining renewable energy and battery storage with Internet of Things devices to monitor and control the network.

It will be funded with $1.8 million from the federal government’s Regional and Remote Communities Reliability Fund, which put aside just over $50 million to fund microgrid trials around Australia. The Latrobe Valley Authority is also contributing to the study.

Dr Scott Dwyer, research lead at UTS’ Institute for Sustainable Future, says the plan is to use Heyfield as a test case that could be replicated in other communities.

“Our institute’s mission is to help organisations move towards a more sustainable future. That’s why we are very interested in making sure this is a replicable process,” he said.

ISF has been looking for a suitable community to conduct this sort of trial, and Heyfield stood out because it had a history of active interest in renewable energy. In 2010 it launched the “Sustainable Smart Town” program that encouraged locals to improve their energy efficiency, which drove uptake of rooftop solar.

Of the 15 businesses in the town, Dwyer said 10 now have rooftoop solar installed, including the pub and grocery store. A third of households also have rooftop solar.

The study will use smart metre technology developed by Wattwatchers to monitor the town’s energy usage. It was Wattwatchers that secured the funding from the government, and they will play a lead role in the trial. Network distribution operator Ausnet are also involved.

Dwyer described the smart meters as “tiny little devices that plug into switchboard and clamp around your electrical cables”.

“They collect really granular data so you know what the town is consuming, then you gather other information from the network. And then you take all this data and you say what the best solution is. It might be a microgrid, it might be virtual power plant, or it might be something else,” he said.

He said the end result could include a community-owned solar farm or battery, along with private rooftop solar and batteries.

If successful, the project could be in the interest of both the community and the electricity distributor. For the community, it could improve reliability and allow them to claim coveted “net zero” status.

For the network, it could reduce the maintenance cost of keeping long, inefficient feeder lines connecting the town to the central grid. Studies have shown that many towns it is cheaper to take them off grid in the longer term than it is to maintain the lines connecting them to the main grid. However, there are regulatory hurdles to cutting whole communities off the grid.

However, Dwyer said while it made sense for some remote communities to leave the main grid altogether, he said it was unlikely that Heyfield would be cut off from it altogether.

In a joint statement, the organisers of the project, which they have branded “MyTown Mocrogrid”, said it would involve “intensive local engagement”.

“Over the three years to 2023, hundreds of households, dozens of businesses, and local schools will be actively involved in the study via energy audits, real-time monitoring and control, data sharing and analytics, public displays and teacher-led online activities for students,” they said.

Tim McCoy, program manager at Wattwatchers, said there had been “really strong interest from members of the Heyfield community to engage in the project and their energy future by installing devices in their homes or businesses”.

“The state-of-the-art Wattwatchers devices will gather real-time energy use and generation to help form a bigger picture of Heyfield’s energy needs,” he said.