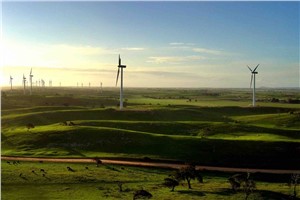 The company, which is based in Bilbao and listed on all four of Spain’s stock exchanges, has recently focused on wind and solar, but it is now also branching into battery storage and has plans to manufacture green hydrogen.

The huge growth plans will include Australia, where it is now one of the biggest players in the wind and solar market. Iberdrola acquired the last remaining shares of Australia’s largest local wind farm operator, Infigen, in December.

The acquisition added 670MW of installed capacity to Iberdrola’s portfolio, and a pipeline of further projects with more than 1GW of capacity.

On top of that Iberdrola is building the biggest hybrid wind and solar farm in the southern hemisphere at Port Augusta in South Australia, with a capacity of 317MW. It is the company’s first greenfield renewables development in Australia.

The acquisition and the Port Augusta project makes Australia the second fastest growing market in Iberdrola’s international division, behind Portugal. The company says it has 900 megawatts of renewable capacity either under construction or secured in Australia between now and 2025. Of that, 510MW is wind and 390MW is solar.

That means it has more capacity under construction in Australia than in the UK. Its traditional markets are Spain, the UK, Mexico, the US and Brazil, which have their own divisions and are not included in the international division.

Announcing a full year profit of €3.61 billion, the company said it wanted to “lead the development of green hydrogen”, and was planning to invest €2.5 billion to produce 60,000 tonnes per year by 2025.

“In 2020, Iberdrola continued to strengthen future growth prospects, increasing its project pipeline by 25 GW to 74.4 GW,” the company said in a statement.

“The company has 17.4 GW of green projects under construction and development, of which 8.7 GW correspond to new solar facilities, 4.5 GW to onshore wind, 2.6 GW to offshore wind, 1.2 GW to hydroelectric, and 400 MW to batteries.

“During the year, offshore wind was confirmed as one of the group’s growth areas: Iberdrola has 1.3 GW installed and is progressing with the construction of a further 2.6 GW, with almost no seabed costs. The current offshore wind pipeline now totals 19 GW, of which 9 GW are ready for construction and 10 GW are planned for development in Sweden, Japan, Poland and Ireland. In 2020, offshore wind projects contributed €585 million to EBITDA, after growing by 72 per cent; this contribution is expected to rise to €2.3 billion by 2030.”