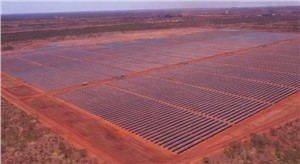 Fortescue Metals is set to funnel at least $400 million into renewable energy technologies such as wind, solar and green hydrogen, as it ramps up its push to be one of the world’s biggest clean energy companies.

That would come on top of around $100 million of investment this financial year. If the iron ore price remains high, the $400 million figure could be several hundred million dollars higher by the end of the financial year.

The iron ore miner unveiled a massive half year profit on Thursday of more than $4 billion, thanks to sky high iron ore prices. It’s been a bumper year for all Australian iron or miners, thanks rocketing demand from China and little competition from the other main iron ore producing country, Brazil. Fellow iron ore producers Rio Tinto and BHP have announced similarly massive profits this month.

All three miners used the profits to fund big interim dividends for shareholders. But unlike the other two, Fortescue will also use them to help fund the start of its bold plans to build at least 300 gigawatts, and possibly an almost absurdly large 1000 gigawatts, of renewably-generated capacity around the world. That capacity would largely be used to manufacture green hydrogen.

Chief executive Elizabeth Gaines said Fortescue would put aside 10 per cent of net profit after tax into renewable projects, through the company’s subsidiary firm Fortescue Future Industries. That 10 per cent amounts to $400 million this half, but will also include whatever profit the company generates between January and the end of June.

Ms Gaines said the 10 per cent figure is a set policy and will continue in the coming years. Another 10 per cent of profit will go into new minerals ventures, while 50 to 80 per cent will go back to shareholders.

Ms Gaines said hydrogen was the ultimate focus, though investment in wind and solar will be necessary to manufacture it in a clean way. “Green hydrogen is the purest source of energy in the world and if we can improve and scale the technology, we can replace a significant portion of global emissions. So that is the driver and focus for us.”

But she said the 10 per cent allocation to Fortescue Future Industries was not free of conditions.

“The intention to allocate up to 10 per cent of net profit after tax is … a capital allocation framework. There will still be a process of assessing the studies work that we are going to do, and really that’s a competition for capital. But this does give a broad framework.

“But importantly, it facilitates the progression of these very exciting and important diversification opportunities for Fortescue.”

“There are some great opportunities that the team are developing, and when it comes to the appropriate time to allocate capital, we will assess that within our disciplined capital allocation framework.”

Fortescue Future Industries, the brainchild of Fortescue founder, chairman and biggest single shareholder Andrew Forrest, is currently in the very early stages of development, and Ms Gaines gave no detail on concrete projects.

Last year, Forrest took a team of around 50 executives on a whirlwind tour of the globe, visiting almost 50 countries where he met with politicians and business people to discuss potential projects. In the Pilbara alone he has said he wants to build 40GW of renewable capacity – which is almost as much as the total existing capacity of Australia’s main energy grid.

The world tour resulted in a string of early stage deals with Chinese, Indonesian and Japanese parties. Among them was a memorandum of understanding with Japanese firms Kawasaki Heavy Industries and Iwatani Corporation to develop a business model for the supply of liquid hydrogen into Japan.

Closer to home, Fortescue announced in November it was investigating with the Tasmanian Government building a 250MW green hydrogen plant at the Bell Bay Industrial Precinct, which would then be used to manufacture green ammonia.

“Subject to detailed feasibility analysis, the Tasmania Project will be an important step in demonstrating our intention to position Australia at the forefront of the establishment of a bulk export market for green hydrogen,” Ms Gaines said at the time.

Fortescue is also aiming to reduce its operational emissions to zero by 2040, and is building solar farms to power its mines. A 60MW solar farm at Chichester is under construction and nearly complete (pictured above), and it has another 150MW solar farm and big battery planned at its other iron ore projects.

Forrest is also an investor with Mike Cannon-Brookes in the Sun Cable project, a $22 billion plan to build 10GW of solar capacity in Northern Territory and an undersea transmission line to carry the electricity to Singapore.