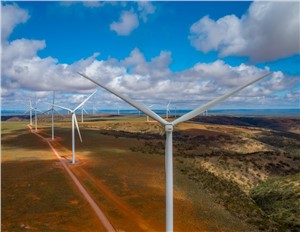 South Australia has achieved a world-leading 60 per cent share of wind and solar in its local grid in the last 12 months, reaching a level of “variable” or “intermittent” generation that is unmatched in a market of its size anywhere in the world.

The milestone was noted by some eagle eyed “NEM watchers” (referring to the National Electricity Market) over the weekend where wind and solar met 84 per cent of local demand over the last three days and 78 per cent over the last week.

Data compiled by the live feed operated OpenNEM shows that wind and solar met 60.2 per cent of South Australia’s electricity demand over the 12 months to February 7. Wind energy accounted for 42.2 per cent, followed by rooftop solar (13.7 per cent) and utility scale solar (4.3 per cent).

This is despite a relatively high level of curtailment through the past year, when wind and solar farms were forced to switch off for either economic reasons (prices were too low), or because of network limits (there was simply too much wind and solar in the system).

The network limits are likely to be eased this coming year when the first of four synchronous condensers (large spinning machines that do not burn fossil fuels), come on line, reducing the need for a certain amount of gas generators to be on line for some essential grid services.

A proposed new link to NSW – scheduled to come on line in 2024 or 2025 – will also allow for yet more wind and solar to be produced in South Australia, and exported to other states, although a recent regulatory ruling rejecting a proposed change to the way network revenues are collected may cause a delay or a rethink from investors.

Now, the South Australia state Liberal government has a target of reaching net 100 per cent renewables (wind and solar) by 2030, and if the new transmission link goes ahead it is likely to reach that target well before then.

In the longer term, South Australia is looking at 500 per cent renewables, eyeing the export opportunities for its big wind and solar resources through either new transmission lines or through green hydrogen.

The OpenNEM data shows that over the last 12 months, the maximum weekly share of demand from wind and solar was 81.5 per cent (in November), while the lowest share of wind and solar over a week was 32.2 per cent in July.

South Australia also reached a notable milestone of having solar meet more than 100 per cent of local demand for a period on October 11 last year, and the Australian Energy Market Operator notes that the state’s electricity prices were the lowest in any Australian state grid in the December quarter.

The share of wind and solar in the grid will be boosted in the short term by the continued uptake of rooftop solar – adding around 100MW a year in South Australia alan – and projects such as the expansion of the Lincoln Gap wind farm near Port Augusta and the opening of Australia’s largest wind and solar hybrid facility, the 320MW Port August Renewable Energy Hub being built by Spanish energy giant Iberdrola and DP Energy.

Over the medium term, more projects such as the first stage of the massive Goyder South projects, as well as Sanjeev Gupta’s 260MW Whyalla solar farm are likely to join the grid.

Over the longer term, there are an estimated 12GW or more of wind and solar projects lining up to connect, including the rest of Goyder South and the Crystal Brook projects promoted by Neoen, the Carmody’s Hill wind and battery project backed by Macquarie and Siemens, and a large number of solar and battery storage projects in an around Robertstown, where the new link to NSW will start.