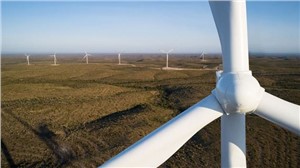 The contract is to supply 70 SG 5.8-170 turbines with OptimaFlex technology, enhanced to operate at 6.2 MW. This turbine boasts one of the highest power ratings in the onshore market, and among the largest rotors, in turn providing an extremely competitive Levelized Cost of Energy (LCoE).

This deal is the third for the 5.X in Brazil and follows the signing in December 2020 of a 465 MW contract in Bahia. Indeed, both deals will see the energy produced at the wind farms sold through a Power Purchase Agreement (PPA) and highlight the growth of wind power in Brazil despite no renewable power auctions being held in the country in 2020. PPAs provide a way for corporations to lock in a power price and deliver stability of their energy costs over the medium term, at competitive prices compared to spot price forecasts.

“This deal underscores how attractive the Siemens Gamesa 5.X platform is becoming globally, and we are pleased to continue to develop a close partnership with Engie in Brazil on top of this. The country is truly becoming a beacon for wind energy in Latin America,” said Lars Bondo Krogsgaard, CEO of Siemens Gamesa’s Onshore business.

This latest deal means the company has sold 1.21 GW of the Siemens Gamesa 5.X platform in Brazil, and now over 2.2 GW globally. This 2 GW milestone has been hit in record time, under two years since it was launched to the market in April 2019. The first contract in Brazil was for the Tucano 312 MW wind farm signed in April 2020.

Siemens Gamesa will locally produce this new turbine at its plant in Camacari in the state of Bahia, in turn boosting the local economy and increasing the competitiveness of the 5.X platform.

Brazil is the seventh largest market for wind energy in the world, according to the Global Wind Energy Council (GWEC), with over 17 GW of installed capacity.