This news is classified in: Sustainable Energy Wind Hydrogen Fuel 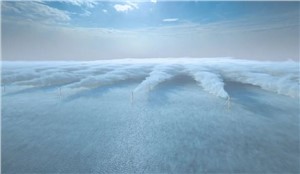 The Danish firm along with ITM Power, Siemens Gamesa and Element Energy are collaborating on the OYSTER project. The consortium was awarded a €5 million grant by the European Commission on Friday.

OYSTER is developing a desalination and electrolysis system that is fully ‘marinized.’ The stated aim is to make green hydrogen cost-competitive as a replacement fuel for methane, i.e. natural gas.

ITM Power CEO Graham Cooley told GTM that the first challenge was integrating the power electronics of the electrolyzer and a wind turbine and the second was to make it stand up to the conditions it will have to withstand at sea.

A modified electrolyzer will be put through its paces in simulated offshore conditions.

“The other important aspect of it is water. And of course, if you're offshore, you be using desalinated seawater,” said Cooley. “So it is about combining all those things together. It's the integration of the electrolyzer with the wind turbine, planning the ability to install offshore and the use of seawater as the main source of water for the electrolyzer.”

Cooley points out that oil rigs have been using desalination equipment at sea for decades and have survived everything the North Sea can throw at them in the process.

Design work on OYSTER will begin now with the project running till 2024.

Pilots plan to answer islanded green hydrogen’s big questions
Plans to use offshore wind power and on-site electrolyzers to pump hydrogen instead of power back to shore are gaining interest, with German utility RWE leading the most-ambitious project, its 10 GW AquaVentus proposal, which has buy-in from Shell, Vestas, Siemens Energy and fellow utility Vattenfall. AquaVentus will start with pilot and demo phases before deploying in 2 GW tranches and hitting 10 GW by 2035.

Pilot projects like OYSTER will help to answer some of the remaining key questions around the concept.  These include sizing electrolyzers to maximize utilization, a key factor in the cost of producing green hydrogen, when offshore wind capacity factors max out at around the 50 percent mark.

Electrolyzer cost is less of a factor than electricity pricing and utilization. That said, manufacturing scale for electrolyzers will help. This week ITM Power shifted its production to a new building capable of housing an electrolyzer gigafactory. Shipments from the facility are already underway, Cooley said.

Swapping pipes for cables
Offshore wind developers also need to be mindful of when hydrogen could be a more cost-effective energy carrier for their projects compared to a high-voltage cable. Floating foundations will enable offshore wind projects to look to deeper waters further from the shore, where the wind resource is superior and seabed conditions become less relevant.

Switching to hydrogen transport rather than electrons could also sidestep any grid congestion issues as electrification unrolls across the heat and transport sectors.

“Offshore hydrogen production could be a future, supplemental way of getting large amounts of energy generated from offshore wind power to shore,” Anders Christian Nordstrøm, VP and head of hydrogen for Ørsted, said in a statement. “As the largest offshore wind company in the world, we’re of course keen to better understand what it will take to produce renewable hydrogen offshore as a potential future supplement to [the] production of renewable electricity.”

The Dolphyn project in the U.K. is looking at a 2 MW pilot floating wind turbine with integrated electrolyzers. Its cost analysis has shown that semi-submersible floating wind foundations paired with electrolyzers was cheaper than other turbine foundations and cheaper than sending power back to shore. At distance from shore beyond 100 km, the difference in cost becomes significant.