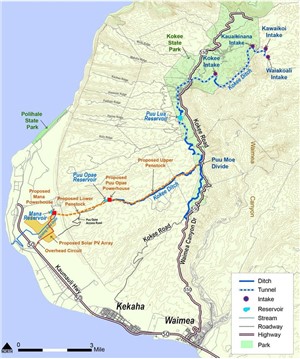 Hawaii's island of Kauai further burnished its reputation for figuring out clean energy years ahead of the mainland.

The nonprofit Kauai Island Utility Cooperative signed a deal with AES to deliver power throughout the night from a solar-charged water pumping system. If approved — a fairly complex process, given the land-use requirements — the project would bring KIUC's electricity mix to 80 percent clean energy by the mid-2020s. The state has committed to 100 percent renewable electricity by midcentury.

The utility already powers the island almost entirely from renewable power at midday, said Chief of Operations Brad Rockwell. With several lithium-ion battery installations to shift solar generation into later parts of the day, Kauai has gone for as long as nine hours in a day on entirely renewable electricity production. But it was tapping out of the conventional options for additional clean energy.

"It got to the point where we just didn’t have any more room in our daytime demand to take more solar," Rockwell told Greentech Media on Thursday. "Now, even those four or five hours of storage won’t cut it. [...] We need long-duration storage."

Long-duration storage devices dispense electrons for longer than today's lithium-ion batteries, which can cost-effectively handle four hours and are edging into longer-duration territory. That's enough to shift solar generation to cover evening peak hours but not enough to carry the grid through the night.

"We’re still running a lot of oil at night" with oil-burning generation plants. "That’s the last nut we need to crack," Rockwell said.

A long-established and trusted technology, pumped hydro storage, can do just that.

Linchpin of a clean island grid
AES plans to refurbish a series of three existing reservoirs in the mountains of West Kauai. A field of solar panels in the lowlands will provide power to pump water from lower elevation to higher elevation, thereby "charging" the system. That water will then be released to flow through two hydropower systems, one with 4 megawatts and the other with 20 megawatts of generation capacity, converting that stored energy back to electricity.

A small battery next to the solar facility will keep the pumps running smoothly when clouds are blocking the sun. The complete system should be able to deliver 12 hours of storage, Rockwell noted.

The development will also assist other uses of the water. It will adjust legacy diversion infrastructure to protect stream health on the Waimea River and deliver irrigation for ranching and farming in the area.

KIUC will pay for energy from the solar and battery system at $71.60 per megawatt-hour for 25 years, Rockwell said. The hydro components are structured as capacity payments, totaling $8.9 million per year, over longer terms that reflect the durable nature of that type of infrastructure.

Wrangling the necessary approvals could take a year and a half, and construction will take around two years, Rockwell said. That pushes potential completion out to at least 2024, depending on how things go.

At that point, the project will occupy a prime role on the island's grid, which has a peak demand of 80 megawatts. The solar component totals 56 megawatts-DC and 35 megawatts-AC, an unusually high ratio. At full output, the 20-megawatt hydro turbine will meet a quarter of the island's peak needs.

The ever-lower price point of solar and batteries made solar-charged pumped hydro attractive, said Woody Rubin, chief development officer of AES Clean Energy. Since the closed-loop pumped hydro portions will be charged exclusively from solar, they qualify for the federal Investment Tax Credit, he added. And the opportunity to refurbish existing reservoirs rather than starting from scratch further lowered the cost of construction.

Will it spread to other places?
The market opportunity for long-duration storage is still largely nonexistent on the mainland. But KIUC has a history of "forecasting the future of what makes it to the mainland," said Rob Cooper, who oversees business development in Hawaii for AES Clean Energy.

The utility must balance supply and demand across the island without the benefit of neighbors with which to share power imports or exports. And the costs of shipping fossil fuels via tanker are far greater for Hawaii than the costs of tapping the abundant natural gas on the mainland.

Those characteristics made new-build pumped hydro attractive for KIUC in spite of its tradeoffs. Permitting and construction are more complex and time-consuming than a pure solar or battery project would be, and pumped hydro is more capital-intensive. But Rockwell said the cost of batteries for this long-duration storage need would have been more expensive.

This format won't work everywhere, but it could be replicable in locations that have existing hydropower facilities that can readily be repurposed and also have space for solar production facilities.

"By definition, you’ll just see it in those places where you happen to have the resources coincide physically and you have the market need," Rubin said. But, he added, "The cheaper the solar, the more opportunities we're going to see for this opening up."