Photovoltatronics: Smart Solar Cells That Talk to Each Other 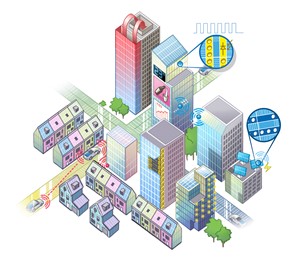 Imagine you’re walking through the city on a sunny summer day. You look at the skyscrapers, the shop buildings, lampposts and electric taxis driving tirelessly to and fro. What you can’t see is that every single piece of their surface is generating and storing its own electricity. The solar cells on these surfaces are interconnected and use some of the power they generate to communicate with objects around them. According to TU Delft researcher Hesan Ziar, this is not some futuristic vision, but a reality that will be happening soon. ‘That’s because,’ explains Ziar, ‘we are going to bundle all of the knowledge in this area into a new research field: Photovoltatronics. Only by connecting energy and information with each other can we really make an impact.’

Smart solar revolution
Until now, solar cells have mainly been used as a source of useful energy. But researchers at TU Delft believe that it is possible to get so much more out of solar energy if solar cells are utilized in multiple ways. Miro Zeman, professor at TU Delft, explains it as follows: ‘Normally, solar cells receive light and deliver electricity. A light particle of this kind is called a photon, and an electrically charged particle is an electron. Both photons and electrons are energy carriers. But in addition to that, both can also be information carriers. Our idea is to find a smart way of combining these two characteristics and merging the functionality of energy and information carrier in one device. This will enable you to design solar cells in such a way that you have a new component that not only generates electricity, but also processes information. As a result, solar cells will be able to communicate with each other and with other devices, ensuring that all the generated energy ends up exactly where it’s needed. This is how we’re unleashing a smart solar revolution.’

Bundling of knowledge
Solar energy is set to play a crucial role in the energy transition. By 2050, solar power will cover at least a quarter of our energy demand, according to predictions from the International Renewable Energy Agency (IRENA). This also involves numerous challenges. One of the questions that always arises is: how is it possible to get the maximum benefit from solar energy in an urban environment? And how can this energy then be used in our living rooms? ‘We will only be able to answer these kinds of questions by bundling together different areas of expertise within a single field of research,’ argues Zeman. ‘That’s why Photovoltatronics is set to be an important catalyst on the road towards a sustainable future.’

Intelligence, storage, communication
An article introducing the new field of research was recently published in Energy & Environmental Science – a leading journal in the field of energy transition. So why are the expectations for Photovoltatronics so high? Ziar: ‘It's simple. Photovoltatronics brings several disciplines together. Soon, solar cells will be equipped with built-in intelligence, energy storage capacity and (wireless) communication. As a result, a solar panel will not just passively generate energy, but actually play an active role in society. Think about solar cells integrated in windows that regulate a building’s daylight, cooling and sun blinds at the same time. It also opens up the possibility of flexible solar cells in your sofa’s upholstery that generate energy, or a solar-powered indoor lamp that switches itself on when it senses it’s too dark.’

Sustainable and healthy
The authors of the article believe that the new field of research can make a significant contribution to a sustainable future. Associate professor Isabella Olindo makes no bones about it: with Photovoltatronics we can look forward to a golden future. ‘With the help of electronics and data-processing software, you can add a bit of intelligence to solar cells. You stick a battery on the bottom of the solar cell, and an excess of electrical energy that cannot be fully and reliably processed is stored in that battery. This technology is not limited to be used in an urban environment; you could even apply it in medical applications. Just imagine – you make a micro solar cell that converts infrared light (constituent of sunlight) into electricity and put it into your body. With the help of an integrated sensor, the generated electrical energy could then ensure, for example, that your heart rate rises and blood circulation is stimulated. Anyway, that really is something for the future.’

Tell a friend:
Photovoltatronics: Smart Solar Cells That Talk to Each Other