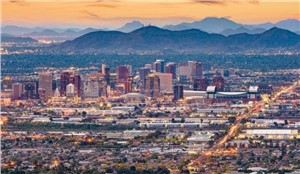 A major clean energy policy cleared Arizona's utility regulator and now heads to stakeholder comment before it can take effect.

The Arizona Corporation Commission voted 4-1 Friday to approve a suite of amendments to its energy rules that amount to a systemic commitment to clean energy. The new rules will require the state's investor-owned utilities to phase out fossil fuels from the grid by 2050, a goal already promised by the state's largest utility, Arizona Public Service. They also require that energy storage systems make up 5 percent of those utilities' total grid capacity by 2035 and that 40 percent of that total be customer-owned or leased.

A few steps remain before the rules are officially implemented, as dictated by the state's rulemaking procedures. The Arizona secretary of state needs to post the rules for a public comment period. After that, the commission will take a final vote in early 2021. But the hard work of hammering out the policy itself has been finished.

"The meeting today was to make sure there was a final, clean package that the commissioners were able to look at and adopt," said Art Terrazas, who worked on this effort for advocacy group Vote Solar. With the successful vote, the clean-energy policy cake has been baked, he said.

The makeup of the commission will have changed by the time it reconvenes for the final vote. Three seats were up for election on November 3, and two Republicans and one Democrat won those races. That created some uncertainty about the final outcome of the measure.

But the energy rules passed Friday by a 4-to-1 vote. One of the newly elected commissioners, Democrat Anna Tovar, ran on a clean-energy platform. Republican incumbent Lea Márquez Peterson won another term, and she joined the majority in Friday's vote. The numbers suggest a majority will remain in favor of the policy after the new commissioners take their seats.

"The hard policy work is never done, but this is a big and important step and can be sustained by the new commission," said Sandy Bahr, director of the Sierra Club's Arizona chapter, in an email Friday.

The question of whether or not to move away from fossil fuels became a flashpoint in the final days of the presidential election. But in Arizona, a longtime Republican stronghold that flipped for Democrat Joe Biden in the 2020 election, the politics of clean energy do not mirror the national political discourse. With ample sunlight and a dry climate, solar paired with batteries began beating out new gas plants in competitive solicitations back in 2018.

"The economics are now matching up with what’s also best for the environment," Terrazas said. "There’s broad bipartisan consensus that that is where we’re going to go."