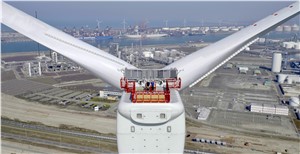 The process of certifying the Haliade-X involved a series of tests on a 12 MW prototype located in Rotterdam, a port city in the Netherlands, and tests of the turbine’s 107 meter blades at the UK’s Offshore Renewable Energy (ORE) Catapult in Blyth and the Massachusetts Wind Technology Testing Center in Boston.

Vincent Schellings, Chief Technology Officer for Offshore Wind at GE Renewable Energy, said “This is a key milestone for us as it gives our customers the ability to obtain financing when purchasing the Haliade-X. Our continued goal is to provide them the technology they need to drive the global growth of offshore wind as it becomes an ever more affordable and reliable source of renewable energy.”

“At DNV GL we predict that offshore wind will generate almost 9% of electricity globally by 2050. One of the driving factors are bigger and better wind turbines with lower LCOE like GE’s Haliade-X”, says Kim Sandgaard-Mørk, Executive Vice President for Renewables Certification at DNV GL. “And we are very happy to see that those turbines are designed to meet highest safety and performance standards.”

Launched in 2018, GE’s Haliade-X offshore wind platform is helping to drive down offshore wind’s levelized cost of energy (LCOE) and is making offshore wind energy a more affordable source of renewable energy. One GE Haliade-X 12 MW offshore wind turbine can generate up to 67 GWh* of gross annual energy production, providing enough clean energy to power 16,000* European households and save up to 42,000 metric tons of CO2, which is the equivalent of the emissions generated by 9,000 vehicles** in one year.

The Haliade-X technology has been selected as the preferred wind turbine for the 120 MW Skipjack and 1,100 MW Ocean Wind projects in the US.

GE Renewable Energy recently announced that the prototype has been optimized and is now operating at a 13 MW power output. Testing will continue and the company expects to obtain a type certificate for the Haliade-X at 13 MW in the first half of 2021. The Haliade-X 13 MW offshore wind turbine will be used in the first two phases of UK’s Dogger Bank Wind Farm, with a total of 190 units to be installed starting in 2023. This will mark the first installation of the world’s most powerful wind turbine in operation to date at what will be the world’s biggest offshore wind farm.

The Haliade-X prototype located in Rotterdam, operating at 13 MW, set a new world record in October 2020 by generating 312 MWh of continuous power in one day.